EVENTS:
-  We had our first family dinner with Easton visiting our home....
-  We had our son and future daughter in law visit from Edmonton, Alberta...
-  Easton meets his uncle and aunt for the first time....
-  Jeanette and I had one really nice hike....
-  Sunday was our opening round golf tournament....

We did have a very nice Friday evening dinner with our kids, their partners and with Easton.  So, that was a first for Easton's historical diary. 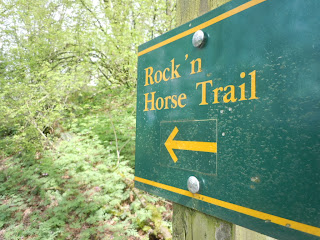 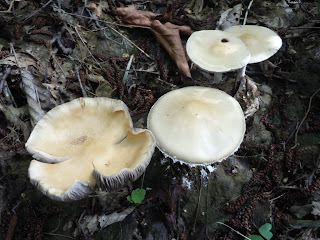 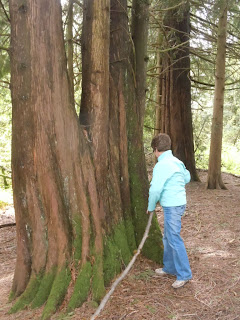 The mushrooms were out.  Although I don't know much about edible or non-edible mushrooms, Jeanette's folks are experts.  Throughout their lives, they regularly picked wild mushrooms for consumption and never once got ill from eating them.  I, on the other hand, would likely pick the deadliest form.....so I don't venture there.


The photo (left) is looking south from 4th avenue towards O avenue.  The road (mid level in photo) is the last Canadian avenue before the US border.  The trees across is a farm on the US side of the medicine line.

To take a good 90 minute brisk hike through the Rock'n Horse Trail was a really nice break from the mundane weather of late.


Sunday was the chosen day to kick off our mens' golf group for the season.  We play every Wednesday - and have been for over 20 years.  Our season opener was held at the Fort Langley Golf And Country Club.  It was a beautiful day with no rain....and the sun was out too. 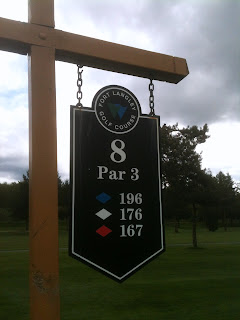 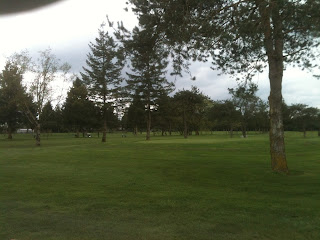 We were pleasantly surprised by the good golfing conditions, considering the high volume of rain of late. 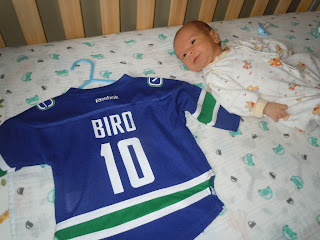 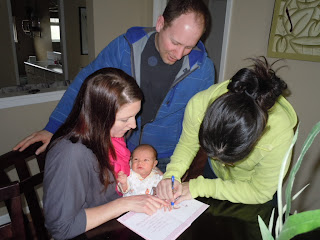 Easton is photographed with his NHL Canucks hockey jersey.  He was born on April 10th and good family friends waited for his birth date to have the date and name inscribed.  With the Canucks out of the playoffs, Easton will be able to grow into the jersey for future NHL hockey seasons.

While here, Courtney and Deni were busy working on their wedding plans.  They had some shopping to do.


Bright and early this Monday morning, I drove Jeanette to the Abbotsford Airport for her flight to the neighbouring Province of Alberta.  She is off to visit with her parents. I know they are looking forward to that.  She was to land in Calgary - to be picked up by her sister - for the drive north through Edmonton and east to their family farm and to the long term care facility her folks are housed in.

Well, time to sign off and move on with some of the tasks to be managed today.

Thanks for dropping by.
Posted by René and Jeanette Genereux at 10:52 AM 3 comments:

It has been fairly routine around here these past few days.  With some breaks in the wet weather, I did manage to complete the install of soffits on the shed.
To cut and fit the soffits takes little time.  Once the guide rails are cut and installed, it's a pretty quick job of cutting and fitting the vinyl soffits in place.
Well, it's a simple answer.  If one wishes to prevent birds and bees (wasps too) from setting up home in the rafters, it's best to close everything off with soffits.  Plus, I like the finished look and would never be completely satisfied with the unfinished look.
Of course, our other primary activities have included visits with baby Easton. He's thriving! He's gaining weight! He's content!
Ginette texted, with the photo above, as she and Easton took a stroll around the neighbourhood.  It was time for both to get out and take in some fresh air....plus the walk kept him sleepy.  I don't think he got much out of that walk but Ginette sure did.

The iron horse was in need of a new windshield and that was accomplished this week.  I did not get any  photos of the dismantling and install but suffice it so say that it was a fairly straightforward job.  It's nice to see clearly through a new windscreen though.

We're looking forward to the arrival of our son and soon to be daughter in law this evening.  They are flying in for the weekend from Edmonton, Alberta.
That sums up the news from around our little corner of the world.  Thanks for dropping by.

Posted by René and Jeanette Genereux at 9:48 AM 2 comments:

My previous blog lamented the unseasonable weather but that changed on Saturday, Sunday and today.  Although rain is expected in the coming days, we did manage to get into some outdoor activities on the weekend and today too.

This was Saturday - a work day in the yard!
To complete the shed project requires the install of soffits, eaves and downspouts....followed by landscaping.

This Was Sunday - a day to ride, play and enjoy!
I did my typical Sunday morning ride to join my friends at a local coffee shop.  After solving all of the world's problems - laughs too - we head home to resume our reality routines. We call our group meetings, "Open Mike......It's All About Nothing!". LOL

Our Sunday reality was to take advantage of a really nice, mild, day and head off on one of our many special rides.  This ride took us on the north side of the Fraser River to Harrison Hot Springs, an 80 minute ride east from our home.
Continuing east toward Harrison Mills, this gives you an idea of just how amazingly interesting and beautiful this ride is.
The nice thing about riding at this time of the year is the lack of tourists and traffic.  Although that isn't a problem during the busy season, it's nice to take advantage of when we can.
We hiked around Harrison Hot Springs for about 90 minutes before resuming our ride back towards home.
This Is Monday - a day to return to the routine of chores...and perhaps a nice walk in the neighbourhood.....and perhaps a nice visit with our new grandchild too!

Can't end this blog without including a photo of Easton.

Posted by René and Jeanette Genereux at 9:54 AM 4 comments:

What's With This Weather?


The small city by the bay - that was our home for 30 years -  is still a place we visit often.  White Rock is only 20 minutes from our new place out in south Langley.  The other day had us drive out to run some errands and book some appointments.  The skies opened up and the sun did shine.  We enjoyed a wonderful beach stroll and a coffee too.
We did book into an RV park in Peachland - District of Peachland - Welcome  - a small community just south of Kelowna, in the Okanagan Valley of British Columbia.  Things To Do | Kelowna, BC | Tourism BC - Official Site    We will be there for a couple of weeks in late May - early June.  Other than attending a wedding, our time will be spent with our children and grand child, and also visiting good friends who live nearby.

The Okanagan is very busy with tourists in the summer months.  To visit in late May - through mid-June - avoids the crush and makes for a very pleasant stay.  The area is known as 'Wine County'.  We will quite likely check out a few of the many wineries that dot the countryside. Wineries & Vineyards | Thompson Okanagan, BC | Tourism BC - Official Site

Not a whole lot more to report but thanks for dropping by.
Posted by René and Jeanette Genereux at 9:33 AM 5 comments:

Been Busy But It's All Good!

You can click on any or all photos to enlarge.

Our time has been busy visiting with our new grand child and, when the weather permits, a bit of motorcycling and hiking.  But the emphasis has been on visits with Easton and lending a hand with the new parents.
We desired a hike on Sunday so off we went to a local hiking trail.  It was, surprisingly, not that busy.  When we hike during the week, we are often alone on this rewarding trail.  Sunday had the working few out there too.  It was a perfect temperature for a 90 minute hike through dense forest, open meadows, long inclines and down slopes.
With so much skunk cabbage in bloom, we could smell it everywhere we walked.  Although somewhat pungent, it's not too annoying.
Watching the NHL Vancouver Canucks getting beat by the LA Kings on Sunday evening, I heard the front door bell.  I opened the door to our son in law Trevor with Easton.  He was out driving around - to give Ginette (the mom) a bit of a break - and he chose this to be Easton's first drop in to our home.  What a pleasant surprise!
Monday morning had Jeanette and I at the US border crossing, early.  We drove to Blaine, WA for a 10:00 am interview with the US and Canadian border security folks to renew our NEXUS entry card.  The card is only good for five years and needs to be renewed.  Our cards were up for renewal.

We love the benefit of NEXUS   Canada Nexus Pass | Canada Immigration Visa & Travel   It's a kind of super passport.  It allows us to use special 'speed lanes' into the USA and back into Canada.
The NEXUS interview began with the Canada Customs officer asking all sorts of questions, finger printing us then, once approved, he passed us on to a US Customs officer who proceeded with more questions.

We were early applicants when we joined Nexus five years ago.  It's a bonus to 'near border citizens' (like us) from both countries who cross the borders often.  It's seamless and quick.  With an 'iris scan' one can avoid the long security lines at designated airports in both countries.  Double bonus!

Once we were confirmed for the following five years of NEXUS membership, we were told to expect our special high security wallet sized cards in the mail within seven to 10 business days.  Once received, we can stash our passports away unless we choose to travel to a countries outside of the USA and Canada.  What a treat these cards have been for us.

When we approach the US or Canadian border, we flash the card in front of a scanner.  When we approach the security officer in the booth, he/she already has our NEXUS security information on computer screen and, other than the rare question(s), we are waved through the border.  YEAH!

The NEXUS card applies to RVers too.  RVers - unlike transport trucks - are allowed to cross the borders using NEXUS lanes.  What's not to like about that?

After a good feeding, Easton does what most babies do best; sleep!  And he is good at that.

And that, blog readers, colours the past three days.

Posted by René and Jeanette Genereux at 10:32 AM 7 comments: