When I left off in the previous blog, our F-350 would not start.  A bit of time with Google and a Face Time chat with our son in law, Trevor had me convinced that the problem was due to a faulty FICM (Fuel Injection Control Module).  Shortly after the computer was plugged into the truck at the local Ford dealer, it was confirmed.  The FICM would need replacing.
Other than dealing with the truck issue, we were not idle.  Our RV friends, Hector and Diane were hosting a family and friends barbecue and we collaborated on meal preparation.  And it was a fun evening.
We roasted two beer can chickens on the Webers; followed with Hector's fish specialties and a whole lot more.

Hector and I enjoy golf and we had a mid-week game planned at the Palm Desert Golf Resort; where my nephew, Ted is the Superintendent.  Thursday morning's 9:08 am tee off was under perfect golfing conditions.  A nice Seattle couple joined us, the sun was out, the sky was blue and there was no wind.
The golf resort is in pristine condition.  The fairways were lush and the greens were true and fast.

Before our Tee-off, we got to chat with my nephew for well over 30 minutes.  He had to run off to look after some business when Hector and I headed out for Hole #1.  Catching up on our lives kept me from taking a photo.  We will be visiting again soon.....and photos will be posted.

The Santa Anna winds were blowing hard yesterday (Friday).  Our sun shade and awning had to come down.  A good thing too!  The gusts would have torn the awning off its mounts.  We have not experienced winds that harsh in several years.
With the gusting winds, Jeanette and I chose to head out with no real destination in mind.  Cruising around Desert Hot Springs brought us to Cabot's Pueblo Museum; built mostly from found materials between 1941 and 1950.  It was a wonderful afternoon activity.

History states that Cabot found this area in 1913, dug only a 3' hole with a shovel and pick, and discovered the healing hot springs waters.  Only 600 yards over and he discovered fresh, clear, clean and cool drinking water.  Desert Hot Springs got its name for the numerous hot springs resorts that were built up in the hills above the Palm Springs/Palm Desert floor.

The heavy Friday winds have abated somewhat today (Saturday).  Although it is still breezy, the heavy gusts aren't prevalent.  We hope it stays that way.


Posted by René and Jeanette Genereux at 7:27 AM 1 comment:

This Sunday past was a planned day at the huge Polo fields in Indio, Ca.  The Empire Polo Park encourages tailgate parking; with barbecues, picnics, open liquor, on blankets and/or lawn chairs.  We opted to attend.
Last Sunday's Polo event was a large one.  Hundreds of interested spectators were on hand.....and many, many were Canadians.  And what an event!
Not knowing the rules and never having attended an event before, we read up on the rules and regulations.  Although an elite sport (and very costly to participate in), we spent a most pleasant day watching two major events.  The last match featured an American team competing against a Canadian team.  Great fun. It was a close game but Canada ended losing by three points.
Between matches, we fired up a barbecue and cooked up some burgers and hot dogs.  Nothing beats an outdoor barbecue lunch.
At the speeds the riders/horses can generate and to hit the small white ball with a mallet takes a fair bit of practice.  And these contestants were very skilled.
Opponents ride side by side and will shoulder check each other.  Anything goes to prevent a striker from hitting the ball.  And they can hit it a long distance. That gets the speed of play going very fast.  It is captivating to see when the action heats up.  To hear the horse hooves on the turf is delightful. In our view, this is a lovely spectator sport.
The Empire Field grounds are stunning.  The gardens and small lakes are a gardener's delight and a tourist's mecca.  Just walking the grounds is reason enough to go there.
Parking costs $10/vehicle.  The event itself is free.  Throw in a self made barbecue and the entire day was an exceptional one.  And we learned all about the sport too.  FYI:  Each rider has four to five thoroughbreds.  And each horse is required for a match.  The horses must be changed out often during play.  At an average cost of $35,000/horse; including feed, housing, veterinarian costs, grooming, training, transportation and more, one quickly concludes that it is a sport for the rich.  One Canadian team was sponsored by REMAX Realty.
Jeanette and I were going to take our truck to the Polo event but when I went to start it on Sunday morning, the engine would turn over but the diesel would not fire up.  Oh...Oh!  Something was up.  And we had no warning of an impending issue.  The truck was running great only the day before. We left the truck for later, changed vehicles and headed out to polo.
I spent a fair amount of time checking out possible problems/solutions online, on Sunday evening and early Monday morning.  The online consensus led to the belief that our FICM (Fuel Injector Control Module) was at fault.  Without warning, the little motherboard dies.  Sure enough, the Ford dealer was very quick to diagnose the FICM as the problem.
One never knows when a FICM will quit working but in our case, it happened only a few months after the warranty expired.  Uhmmm, it makes one wonder if the mother board - inside the module  - was programmed for that eventuality.  I am speculating.....with no foundation.....and with no evidence.  LOL
We have experienced a cooling down here in the desert.  The lower temperatures, increased winds and overnight rains have been the norm, these past couple of days.  It is windy today (Tuesday) morning.  But it is shaping up to be a very nice and sunny day.  The sky is clear and the temperatures are set to return to seasonal highs.The winds are to abate later.
And that's the way it has been here in the Coachella Valley; home to many cities, including Palm Springs, Palm Desert, Indio, Desert Hot Springs and more.

Posted by René and Jeanette Genereux at 9:32 AM 5 comments:

We've been busy burning data with FaceTime chats. We spent time watching our Edmonton based grandson, Owen walk and play and smile and wave and more.  Little Owen celebrated his first birthday this past mid-January. Now that he is walking, he's proving his independence.
We still marvel at just how connected we are although we are so far away from our family and grand kids.
Deni and Courtney held a fun birthday party a month or so back and the photos pretty well tell the story of the fun had with other like minded kids.
The second birthday party celebrated Brie's first birthday only a few days back.  Brie is now demonstrating a desire to walk.


Posted by René and Jeanette Genereux at 8:00 AM 2 comments: 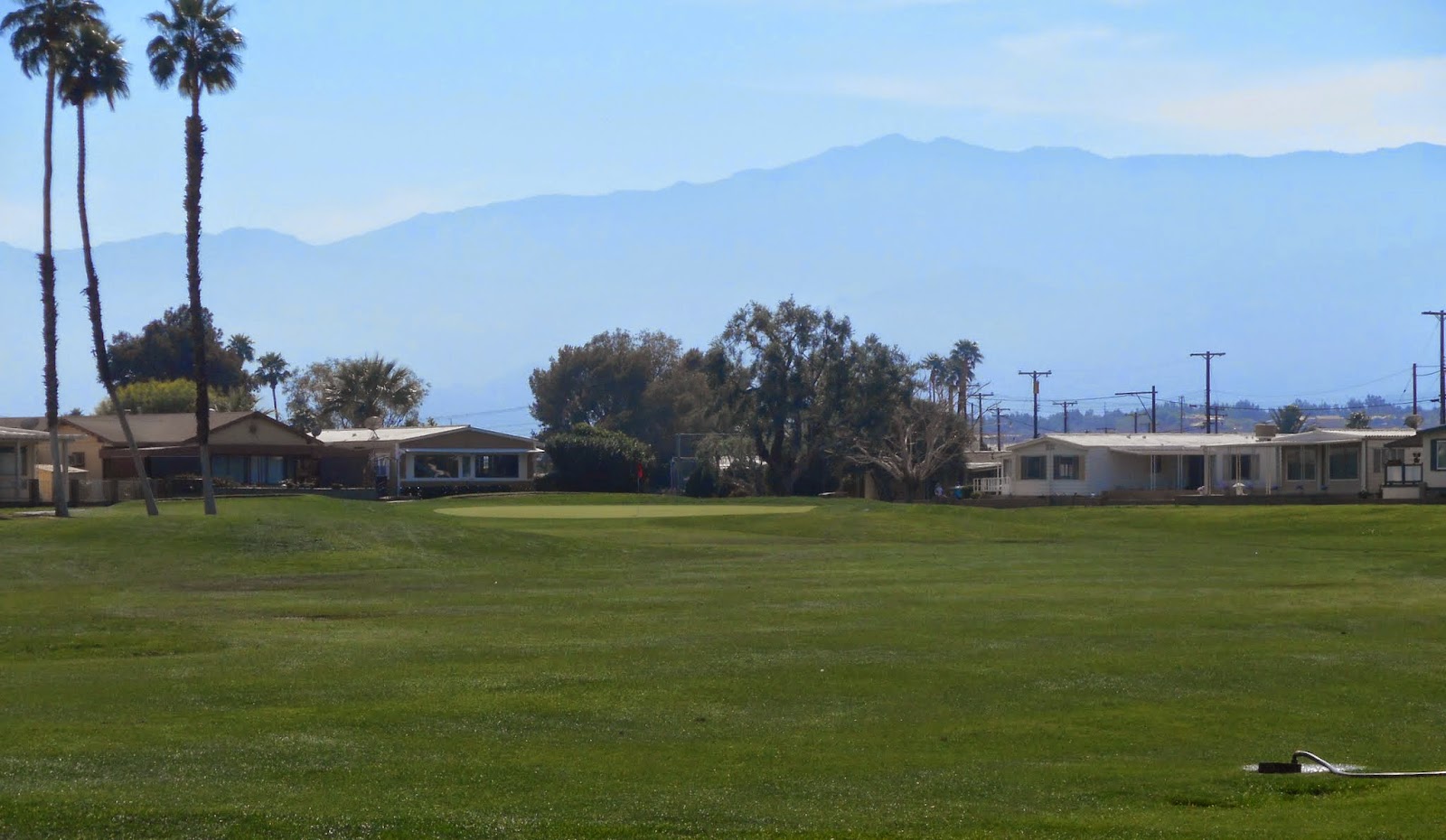 Other than daily walks around our RV park, Jeanette has been attending Zumba classes on Mondays and Wednesdays.  When not walking with her, I've joined others for a round of golf and one most recent long, long motorcycle guy ride.
We were invited to Stan and Roz's resort community for a round of golf and an evening dinner.  We played 18 holes on their lovely golf course.  And I shot one of my better golf rounds; an 82.
Hector and Diane contributed the west coast Pacific salmon, others contributed the balance of the food stuffs; including wine, and we enjoyed a superb dinner at Roz and Stan's lovely home in 1000 Palms.
That meal was first class. And it was a really nice way to close off a wonderful day of golf.
Fellow rider, Lucky invited me to join a ride that would see us travel all the way south towards the Mexican border, west towards San Diego then north on S-2 through great California mountain country.  We skirted Borrego Springs as we made our way back north.  We rolled further north from there into Warner Springs, Anza and back down into the Palm Desert floor from an elevation well over 4000 feet.
The tiny restaurant in Ocotillo served some well earned sandwiches for the hungry riders.  We may have overwhelmed the kitchen staff.  I don't think they often get such a large group come lunchtime.  The food was good though.
Taking a fuel and ice cream break in Anza, CA, our final run on Highway 74 and into the desert floor would take us another hour.  Our arrival - following well over 300 miles - was completed just before nightfall.
While Jeanette was at Zumba yesterday morning, I was futzing around the Desert Hot Springs area, in search of a special swivel wheel bolt that had broken.  No luck with finding one.

Back at our RV site, I looked online for a specialty nut and bolt supplier and I located a 'Fastenal' dealer in Palm Desert.  Shortly after lunch, Jeanette and I drove to the Fastenal retailer.  We found the right specialty bolt.

We had also planned to spend a couple of hours enjoying the ambiance at the JW Marriott Resort.  It was one busy place.  Parking was hard to find but when we did succeed in securing a space, we enjoyed walking around, sitting by the water, and generally relaxing in the fabulous environment.
There are two top rated golf courses here.  I have played both courses in years past.  The grounds are lush and one gets the feeling of being at a ocean-side beach front resort.  It is an impressive place. And this area sports many, many other similar golf and spa resorts.

We watched some golfers putting out on the 18th hole in the photo below.
And that's the way it has been from here.

Posted by René and Jeanette Genereux at 7:13 AM 4 comments: