That's right!  Today we prepare to start our journey north and back for home on the Pacific southwest coast of British Columbia.  After two months here in Caliente' Springs Resort -with recent high temperatures reaching 104 F - it is time to return home.
Yesterday was preparation day.  We put away most of the long term items, removed the sun shade and closed the awning.  Other than moving out of our site today, attaching the swivel wheel deck and loading the motorcycle, we're pretty well organized.
Our last few walks around here has revealed some nice colours emanating from the desert plants.
With the recent high temperatures, our regular walks occurred early in the morning and after sunset in the evenings.  The desert does cool off once the sun sets in the west.   But during the day, our air conditioners were well exercised.
One surprise this winter has to be the less than normal high winds this area can be prone to.  Oh sure....there were some windy days but not nearly the volume we've experienced in years past.
We have enjoyed a lovely winter touring around in southern Arizona and California.  We have met many interesting RVers, motorcyclists, golfers and bloggers and more.  We've made some new friends and got to spend time with friends we've met over the years.  It has been a rewarding time.
We exercised our motorcycle and rode well over 4,000 miles.  We've spent time on the California coast, the local mountains, the sand dunes, and in several resorts.  We've put up with cool desert temperatures, unusually high volumes of rain and recent high heats.  We've seen spectacular sunsets and sunrises. And we've enjoyed every bit of the experience.
We now leave here with pleasant memories.  And we look forward to catching up with our families and friends back home and to make new memories throughout our spring, summer and early fall before - we trust - we can return to the desert we so enjoy during our winter snow birding journeys.


Posted by René and Jeanette Genereux at 4:43 AM 6 comments:

Waning Days in the Desert

With our winter sojourn to the US southwest coming to a close, we took advantage to ply the links of the Desert Dunes Golf Course before storing the golf clubs for the drive back home.
Mid-morning, Thursday  was when Hector and I met Fred at the Canadian owned, Desert Dunes GC.  It was a picture perfect day offering only a very slight breeze and predicted +90's temperatures.
We were joined by a former Palm Springs High School coach - now retired - who knows the golf courses this region offers.   And he's an awesome golfer too. A surprise to us was just how busy the golf course was.  Tee-times were set at 8 minutes apart.   That, in my view, is far too tight.  But a few holes into our round and we did not have any waiting times on the Tee boxes.
It was hot, hot, hot!  I drank four bottles of water during the round.  The temperature rose to the mid-90's.
Shortly after Fred drove off, Hector, Diane, Jeanette and I headed off to Art and Connie's 1000 Palms home for dinner.  Roz and Stan joined us there and we enjoyed a lovely meal in their air conditioned home.
The days ahead will see us start storing stuff for our Monday morning departure back for home.  It is not a major chore and we will take advantage of the pools (during the high heat) as well as a few more planned activities.

Posted by René and Jeanette Genereux at 5:28 AM 5 comments:

Other than the usual desert snow-birding activities, it is always fun to try something new.  Golfing friend Fred, along with wife Pat, invited Jeanette and I to join them for happy hour at Jackalope Ranch in Indio.  We met there at 4:00 pm Monday.

Welcome to the Jackalope Ranch Restaurant, Indio CA
In all the years we have spent a few months hanging out in the Palm Springs area,  we had never been to Jackalope Ranch.  Fred and Pat thought we would really enjoy the place.  And they were right.  The ambiance here is captivating.  The happy hour drinks are cheap (relatively speaking) and the happy hour foods are really, really good.
Walking the ground, with so many waterfalls, green space, flowers, trees and more, is a treat.  We see ourselves returning here again.
And this place does get busy; very busy.  Getting there at 4:00 pm offered plenty of seating choice.  Within 30 minutes though, the place is transformed into a bustling full house of patrons - indoors and out. 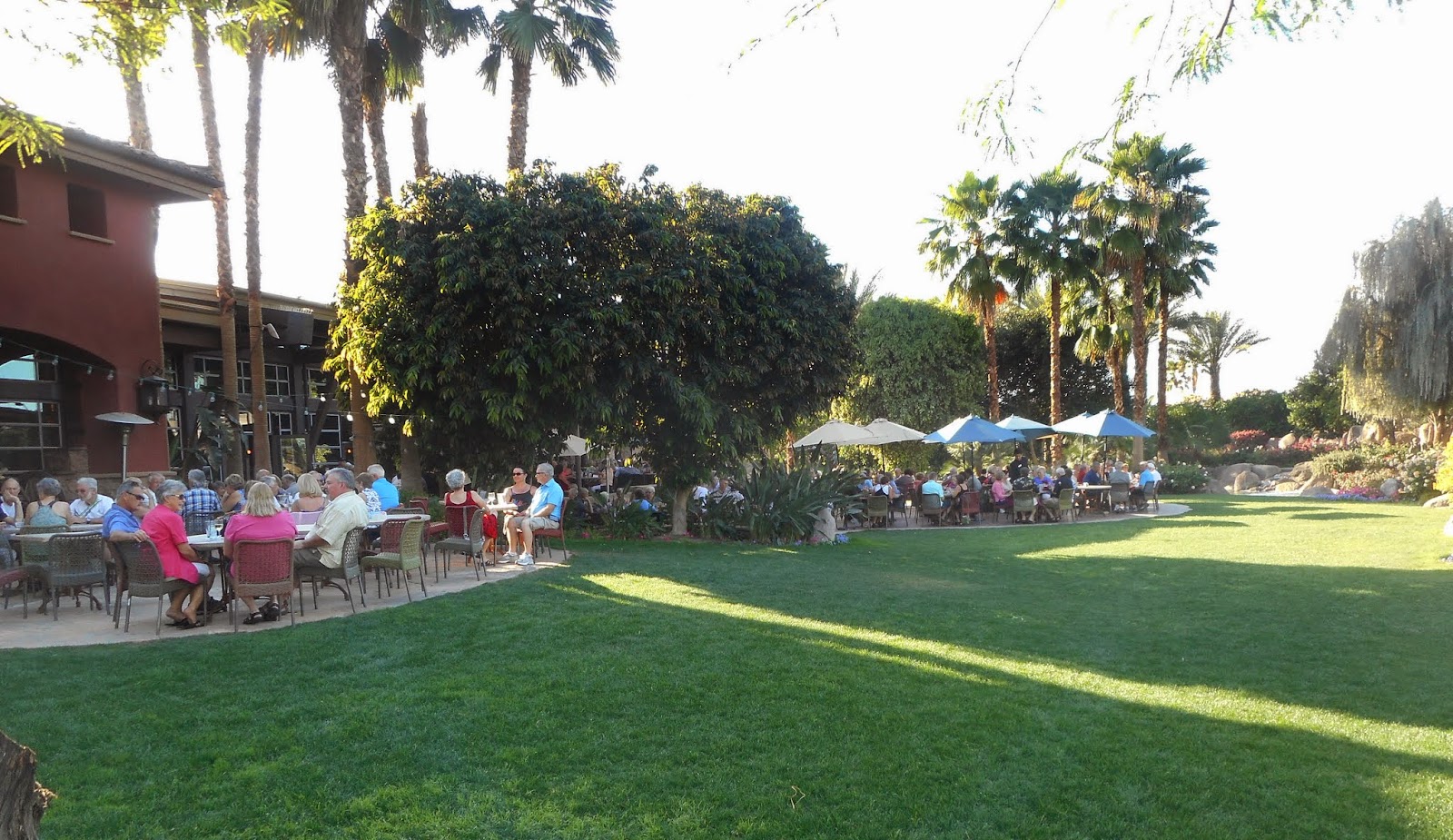 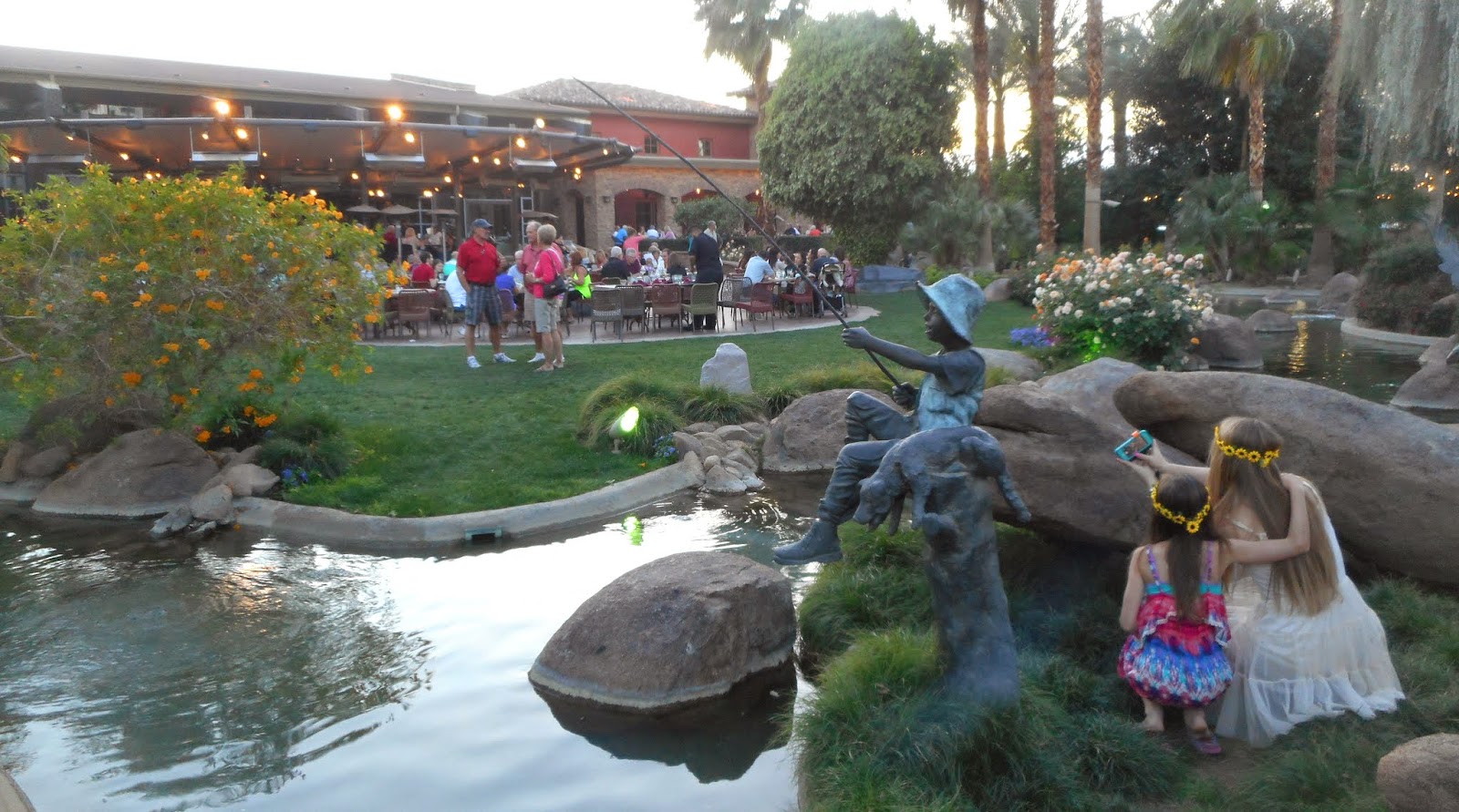 I took the time to thoroughly inspect this beautiful hand carved wooden motorcycle.  The detail is second to none.  The craftsman covered the detail so well.  I can understand why the restaurant does not want anyone touching it.  It is a full size wooden replica of a 1940's Harley Davidson.

The jackalope is a mythical animal of North American folklore (a so-called fearsome critter) described as a jackrabbit with antelope horns. The word "jackalope" is a portmanteau of "jackrabbit" and "antelope", although the jackrabbit is not a rabbit, and the American antelope is not an antelope. Also, many jackalope taxidermy mounts, including the original, are actually made with deer antlers.
Two brothers, hunters with taxidermy skills, popularized the American jackalope in Douglas, Wyoming, in the 1930s by grafting deer antlers onto a jackrabbit carcass and selling the combination to a local hotel. Thereafter, they made and sold many similar jackalopes to a retail outlet in South Dakota, and another taxidermist continues to manufacture the horned rabbits in the 21st century. Stuffed and mounted, jackalopes are found in many bars and other places in the United States; stores catering to tourists sell jackalope postcards and other paraphernalia, and commercial entities in America and elsewhere have used the word "jackalope" or a jackalope logo as part of their marketing strategies. The jackalope has appeared in published stories, poems, television shows, and video games, and a low-budget mockumentary film, and the Wyoming Legislature has considered bills to make the jackalope the state's official mythological creature.


And that covers things from here.
Thanks for dropping in.
Posted by René and Jeanette Genereux at 6:21 AM 5 comments:

It has been an interesting week of relaxation, walking, visiting, cooling in the pools, attending a concert, entertaining friends, golfing and more.

We had advanced tickets to the Kenny Hess concert here at our resort.  Several friends (within and outside the park) were attending too.  Kenny is a prolific songwriter with credits that include touring with several big name country music artists, writing more that 600 songs, and mounting some large music festivals.  He is best known as Canada's best known secret.  And....he is very talented and puts on a really, really good show.  He is a great story teller. He also wrote the song, '23 Days' that our daughter, Ginette recorded a few years back.

Check out his WEB site by clicking on the link below his photo.

Kenny Hess - Country Performer - Singer/Songwriter - Recording Artist
Before Kenny's concert, we invited several folks over for an early happy hour followed by burgers on the grill.  It was a perfect late afternoon gathering.
Jeanette took the photos and was also busy with putting together a very nice outdoor style meal.  No one left hungry!
Friday was a dedicated golf day.  One of my regular men's golfing partners, Fred and wife Pat are in Palm Desert for the month of March.  A prolific golfer, it was not long before we had lined up some golf.  That started in earnest with a first round at the Palm Desert Golf Course; the course where my nephew, Ted Genereux is the superintendent.  Ted is the youngest son of my oldest brother, Bernie and wife, Rita who call Yuma their winter home.


Ted recognized my truck when we were approaching the course.  He dropped by to say hello....and I finally got to meet his sidekick friend, Sadie his little dog of 12 years.  Ted had lined up our game at his course.  We had a nice visit before he was off to solve one problem before heading into a meeting.
Our Tee off - at 10:44 am - was on time.  Fred joined Hector and I and we got to enjoy a truly fine golf round.  The course is in great shape.  The greens are true and fast.  And....there are plenty of traps and other obstacles to challenge our wit.
The golf course was busy.  And that is a good thing!  Even without a Marshall, the speed of play seemed OK.
It may be hard to believe.....but we all hit long drives that placed us in good positions to reach the green with our second shot.
Fred and his wife, Pat are staying at a resort nearby the Palm Desert Golf Course and we were invited over for hole #19.  That's where we could enjoy a refreshing beverage, with finger foods, while reliving our nice golf round....or chatting about Fred and Hector's favourite second hobby; fishing.  And fishing did occupy a large part of the conversation.

Pat was relaxing with her right arm propped up on a pillow, recovering from a severe break of her right wrist and arm from a recent fall.  The cast is now removed but it will take some time before she can get back to her love for the game of golf.
Hector and I were to join other friends - including our spouses, Diane and Jeanette - at the Dillon Roadhouse.  When we arrived at the saloon, Richard 'The Canadian' was busy hosting his last snow birding karaoke show of the season.  The place was noisy and busy.  We had reservations.  Good thing too.  Our friends were all there....and we enjoyed a fine three hours of entertainment (some good karaoke singers and some not so good).  But everyone was having a fun time.
Back in Edmonton, Alberta, Jeanette's sister, Darlene sent some photos of a most recent visit she had with Deni and little Owen.  While Owen's mom, Courtney was busy being a nurse in a major Edmonton trauma centre, Deni took Owen for a nice country drive to visit their grandmother/great grandmother.
Owen is an easy going little fella and he's quite OK with being handed off to people.  And the pleasure he brought to his great grandmother is beyond words.
And that's the way it's been with us and ours, this past week or so.

We have one more week in the desert before we begin our preparations to roll northward, back for home.  It's that time of the year.  Some of our friends have already headed north or are planning to do so in the days ahead.

That covers things from here, for now.  Thanks for dropping by.
Posted by René and Jeanette Genereux at 9:40 AM 4 comments: