Why would a 'Coyote Wash and Dirty Laundry' slug line be of interest to readers?  Well, truth be told, not much.  But, the title does reflect our activities, these past couple of days, here in Yuma country. Coyote Wash is a golf course....and..... 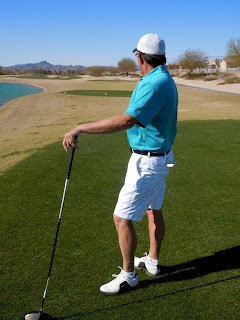 This was the dirty laundry - following a wash, of course - left to dry in the desert sun. 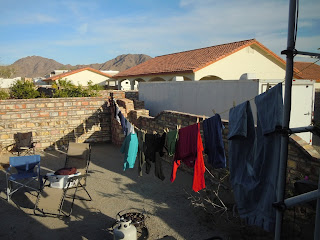 So while I focused on hitting a little white ball on some green grass..... 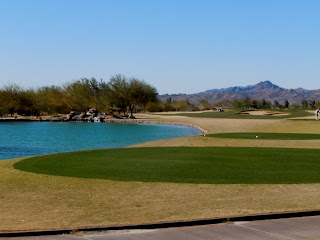 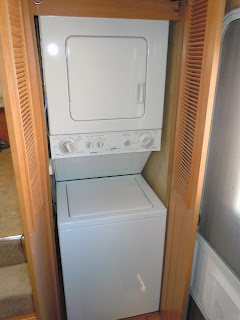 Jeanette was busy with doing laundry....and by choice, I might add!
So, other than a couple rounds of golf with Hector (yesterday and the day before), Jeanette managed to complete the dirty laundry....and catch up with the shopping requirements.

Other than some bit of business to look after..... 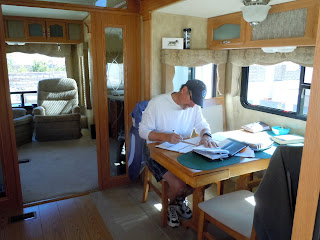 Today will be a day to return to other activities we so enjoy in the desert.
......and a lot of nothing too.

We continue to enjoy what the Yuma area has to offer.

Posted by René and Jeanette Genereux at 7:28 AM 5 comments:

A Whole Slew of Activities....

We've kept busy, these past couple of days.  We've motorcycled as a twosome and in a small group; held an RV barbecue at our RV site; completed some long, long walks and topped it off with golf.  This was all managed between the one very windy day we faced recently.
Hector and Diane were joining the motorcycle riders for breakfast and jokingly showed up with their pee wee Harley (an electric scooter).  That got some early morning laughter going.  Storing the scooter away, they drove out to our breakfast place in their sport ute.
The clubhouse was very, very busy.  Although it took  some time to get our breakfast fare, it was worth waiting for.   There was not one complaint as everyone was digging in to their food.
We chose to ride into the Dome Valley following breakfast.  However, the strong desert wind reared its ugly head and, facing a severe sinus cleansing, we opted to ride back to Yuma and wait for a calmer day to complete the ride. 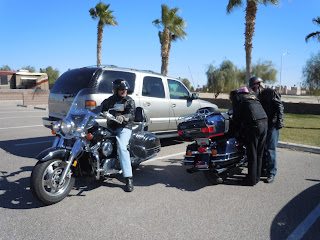 Arriving back at our RV site proved to be a good choice.  We had invited a group of RVers, my brother and sister in law and other friends for an early afternoon 'happy hour' followed by burgers on the barbie.  Arriving earlier gave us plenty of time to set up the picnic site behind our fiver.
It wasn't long before the burgers were grilled and the hungry visitors were digging into the fare.
As expected, it wasn't long before the laughter started in earnest.  My brother, Bernie was quick with the jokes while Hector and George were equally quick with the one liners and jokes. Most of the women were equally quick with shots too.  Great fun....filled with laughter!
When the sun sets, the desert air cools quickly.  Our trusty propane fireplace took the chill off and added to the evening outdoor comfort.  All were impressed with its ability to throw out good heat, with no smoke....typical of wood fires. 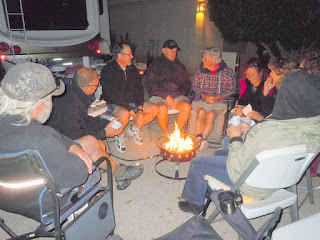 By 8:00 pm, these busy snowbirds were fading and soon to head back to their respective homes.  Jeanette and I cleaned up and settled in for the customary evening of blogging, emailing and catching up on TV news from home and beyond.  Our satellite dish gives us the very same Canadian TV access that we have at home.


The following photos tell the story of our RV spot in the Yuma Foothills.  It's our second year renting this spot from the owner, Yuki, who's regular home is in the city of Sacramento, CA. It is a lovely, full service, level spot, and it offers privacy and plenty of space to find all sun sides and shade when required. 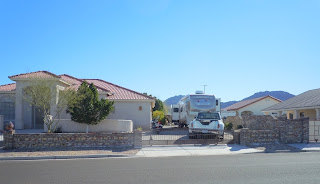 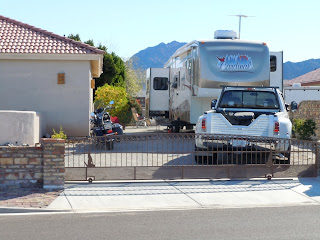 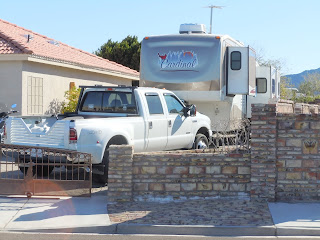 On our agenda today is a round of golf for the guys, while the girls have planned another day traipsing the Yuma shopping district and heading back into Algodones, Mexico.

Lucky, Hector and I will work the links today.  Another golfer, we invited along, has come down with the desert crud (a term locals use to identify a severe cold and flu).  He's opted out. 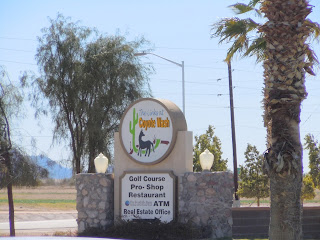 Playing this 'new to us' golf course will be fun.  We look forward to it.  The weather is picture perfect; no wind, no rain, no clouds, no dust.....! And the temperature will hit the high 70's/early 80's!


And that colours our lives these past couple of days.

Thanks for dropping by.
Posted by René and Jeanette Genereux at 7:54 AM 5 comments:

It's a Lovely Day in the Neighbourhood....

A blog or two back, I mentioned that a future blog would reflect the area we are ensconced in, till mid-March.  Yuma Foothills offers a unique mix of old and new properties, that features homes and casitas with RV sites. We are in the newer development area.  Each RV site offers full services.  Most are gated.
We particularly enjoy the newer area, dotted with lovely homes and well kept yards.  Some homeowners, such as the yard were are in, rent out a private part of their yard.  Ours is quite private and quiet. Other sites may only have a small casita (or shed) and full hookups for up to three or four RVs.  I'll feature our RV spot in a future blog. 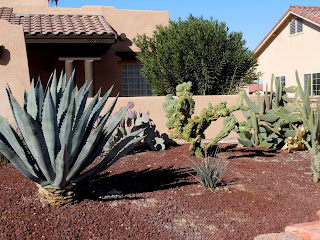 We walk the area every day; taking different directions and routes.  Each walk offers something new.  Many RVers walk the residential streets, washes, or desert; or hike the mountains to the east.


I'll let the following photos tell the story about this beautiful development. 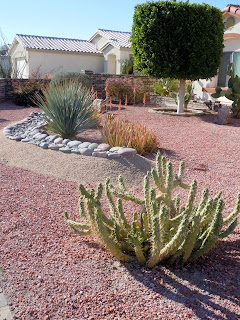 Jeanette and I rode east, over the mountains, and into the town of Welton, the other day.  Our goal was to book a Tee time for Tuesday.  I look forward to playing the course.  It will be my first time there.  It's a lovely layout with many troublesome water hazards.  I may have to purchase some floating golf balls!
From Welton, we rode through the north and west side of Welton and along the numerous vegetable farms that dot this countryside.  It's nice to ride paved roads in between crops of leafy, green vegetables that are harvested and trucked to points north, east, west and into Canada too.  I often see Canadian based transport trucks rolling in and out of Yuma.

We came out of the farm country, on Highway 95, and headed back to Yuma, then to my brother and sister in law's place for a mid afternoon visit.  They, along with several other friends, will be coming to our site this mid-afternoon, where Jeanette and I will host an outdoor RV style barbecue.  More on that in a later blog.

Before we prepare to host the Sunday burgers, we'll head off with a small group of motorcyclists who invited us to join them for a Sunday ride and brunch, taking us over the eastern hills and into some country we likely have not ridden in before.  We look forward to that.  Speaking of riding, I had better post this soon so that Jeanette and I can ready for the ride.

Happy Sunday to all.

Posted by René and Jeanette Genereux at 7:04 AM 6 comments:

It is shaping up to be a beautiful day here in the Yuma Foothills.  Following a couple days of cool, breezy weather - with an hour of rain - the regular temperatures are set to return.  Yea to that!
While Tucson and Gold Canyon had snow on the ground, we escaped that here in Yuma.  You guessed it!  We were golfing, while the PGA WGC Accenture March Play tournament was halted due to snow in Marana, AZ, 20 miles north and west of Tucson.  Marana, AZ - Official Website
Although it was cool - and we were dressed in layers - the breezy Wednesday conditions did not deter our resolve to play 18 holes.  Within two golf holes, one layer of clothing was removed and we golfed our round in decent conditions.  We were joined by Dieter - who lives in the San Fransisco area - for the round.  A fun round it was!
While Hector and I busied ourselves with golf, Diane and Jeanette were in Algodones, Mexico, running some errands.  They purchased some fresh shrimp, from the Sea of Cortez.  With fresh vegetables, we were in for a scrumptious dinner.

Hector and Diane joined us for the outdoor food fare...and what a great meal it was.  To enjoy a fresh outdoor meal, after a round of golf, rates a 10 on any scale!

With the outdoor fireplace lit, to ward off the early evening desert chill, we enjoyed this tasty meal.
Diane and Jeanette - joined by Trena - were planning a Thursday of activities, starting with a craft fair in Yuma. I, on the other hand, had a long list of RV things to look after.  It began with re-filling our drinking water container, getting one propane tank refilled, dropping by an RV supplies facility for a few needed items and returning to wash the windows and complete some minor maintenance stuff.

I continued to check in on the PGA golf matchplay happening only 3.5 hours east from us, in Marana, AZ.  Some top class golfers were eliminated; including Tiger Woods and Rory McIlroy.
The craft fair was being held at the Country Roads RV Resort - my brother and sister in law's RV spot - and the group met there first.
Following the craft fair, the girls drove back into Algodones.  Diane had some follow up directives to pass on to an artist who is creating a painting for her.  They dropped Jeanette back to our site, late yesterday afternoon.  By all accounts, they had a great day, out and about.

With the breeze and clouds moving in and out of the valley here, these past couple of days, the outdoor temperature called for sweaters, on and off, all day long.  The temperature didn't get past 66 degrees, yesterday, but the promise of hotter temperatures today bodes well for some outdoor activities.  We'll report on that in the days ahead.


Posted by René and Jeanette Genereux at 7:03 AM 5 comments: