Now, most of us have read or even studied the 'Area of a Circle' - best known as

(pi r squared).  I understand the formula  but I am here to tell you that the pie we motorcycled a great distance to purchase was, in fact, round.  Hence the title of this blog.

For the serious math whiz, click on this link for a clear understanding about the  Area of a Circle

Hey, we're just having a bit of fun here! And the round pie we chose was purchased at the Julian Pie Company (photo below).
Jeanette and I were ready for a nice motorcycle ride and we chose Julian, CA as our destination.  We rolled through Palm Desert on our way to route  74 that would take us over the Santa Rosa Mountains and into the high elevation roads west of Mount San Jacinto.
We rode over the mountains; through the switchback highway that would lead us to the the little town of Anza, CA.  Further west had us heading south on highway 79 towards Santa Ysabel and into the quaint litle town of Julian.


Click on this link for more information on the town of Julian
Julian, California - Wikipedia, the free encyclopedia 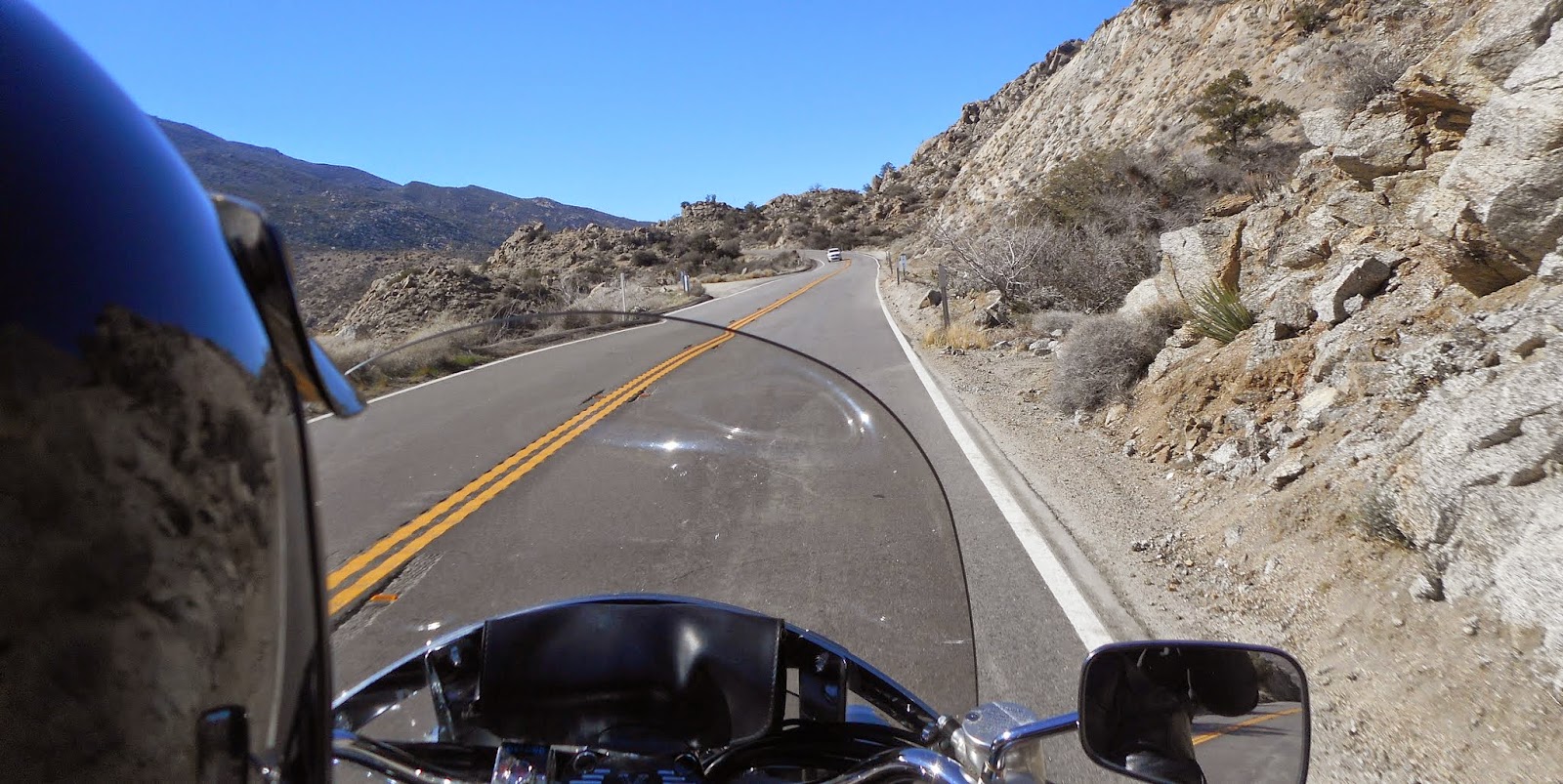 Following a short break in the town of Anza, we arrived in Julian within two hours from leaving our RV site.

During the work week, this town is busy with tourists, motorcyclists and retired RVers.  So, it is most manageable.  On weekend days, it is swarming with locals and California residents who take over the place.  To travel here on a work day is a bonus.
It is a great place for lunch (with pie) and it was lunch time when we found a nice spot we had been to before. 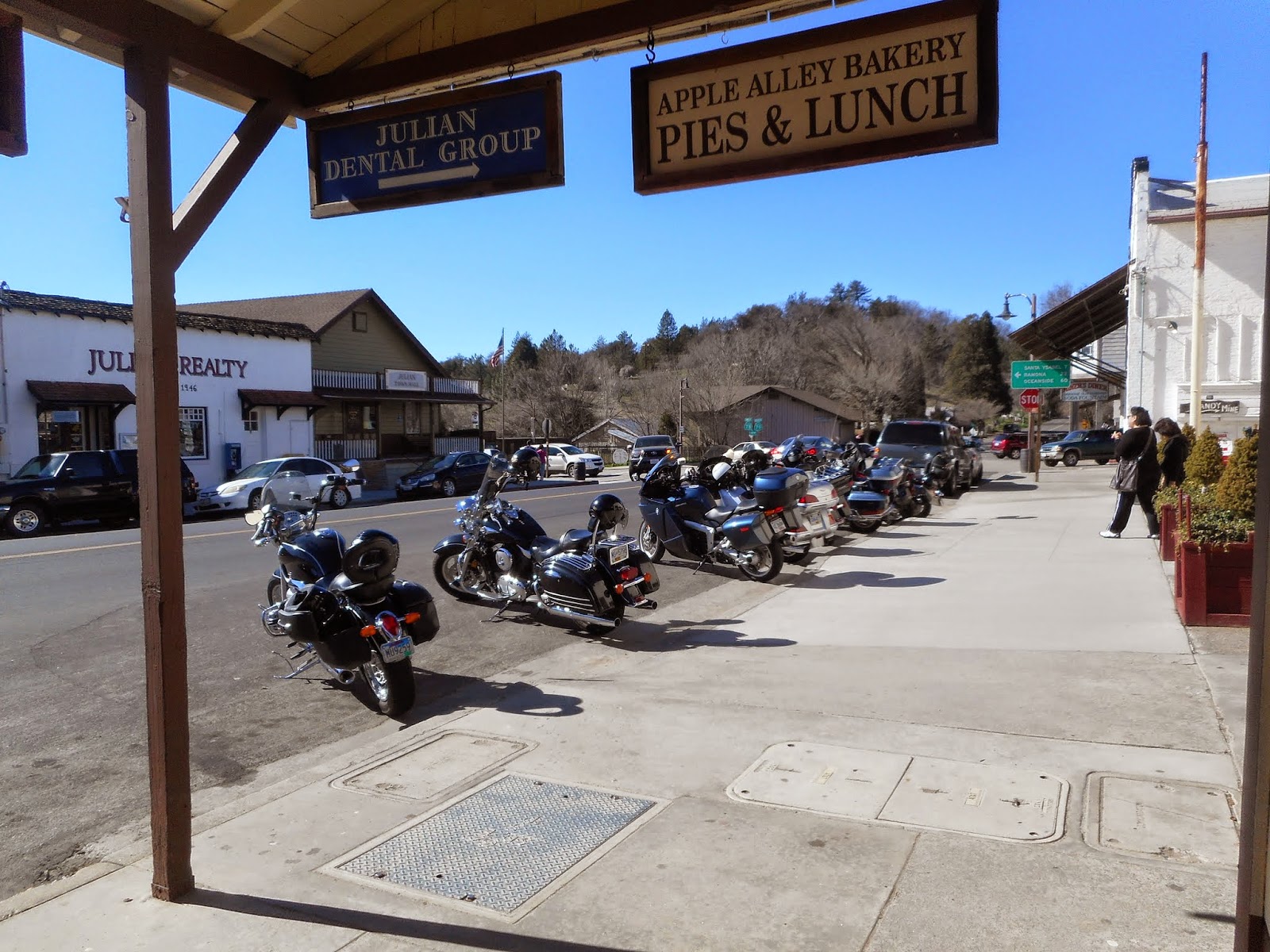 Sitting out in the high noon sunshine was about as perfect as it gets.  We ordered two specials (1/2 sandwich, soup, and a choice of several varieties of pies).  And the pies are all sooooo gooooood!
Jeanette wanted to stop at the Julian Pie Company in Santa Ysabel (only a few short miles west and north from Julian) to purchase an apple crumble pie for our shared dinner with Hector and Diane back at our RV site.
Because we were motorcycling, we chose an unbaked, frozen apple pie that we could safely transport in one of our hard saddle bags.  Well packaged, it survived the return trip.
To motorcycle through this countryside is such a gift.  Talk about beautiful, twisty roads that offer up so much topographical changes along the way.  Traffic was light and we often seemed to have the road to ourselves.  Bonus!
Back by 5:00 pm, Hector and Diane were sitting in the waning sun and we're surprised with our surprise for dessert.  Diane offered to bake the frozen pie and by the time we had enjoyed their really good dinner of ribs and veggies, the pie was ready to be enjoyed with a truly good cup of evening coffee.

And there you have it.  Our pie was round and we also refreshed our math skills on the fact that the area of a circle is made up of a lot of little squares.  So....the theory that  'Pie Are Squared" (

) rings true.  But, the most important fact we recall?  That was an awesome tasting pie.
And that's about if from here for now.  Thanks for dropping in.

Posted by René and Jeanette Genereux at 7:42 AM