Phew!.....after so many days without internet, it's nice to be 'back in blogland'.  We have been @ Jeanette's parents' place - on a farm, in the country, without internet.  Her folks are well into their late 80's and are not computer users.  I did try to find a few WiFi spots in the area but kept striking out.
Let's see now, we left off with having attended Jonathon's Duke of Edinburgh Award.  That was followed up with our attending his high school graduation ceremony.  Congratulations  Jonathon!!!  Yeah!!!
So, we were all in a festive mood to celebrate Jonathon's graduation.  He's moving on to study petroleum engineering this fall.
From this event, we headed north to Edmonton and east to the country where Jeanette's parent's farm.   In their late 80's, this is the first year they did not seed nor will they harvest.  At age 86, father in law John has rented his land
A five hour drive north of Calgary and east of Edmonton brought us into Jeanette's parents' yard.  It is about 25 minutes north and slightly east of Vegreville, Alberta. It was here that no internet connection was possible.  For a computer user this can be problematic and lead to some type of cyber detox.  Aargh!  Seriously though, a few days without internet is not a big deal.
From Jeanette's parents' farm, it's a 45 minute drive - in this case, a motorcycle ride - to St. Paul, Alberta.  That's my home town.  I have a brother and a sister who live there.  My brother and his wife are winter snowbirds who spend their winter months in Yuma.   They were featured in a late January blog.
While Jeanette was busy with family stuff, I rode off to visit my brother.  He was busy completing their new home outdoor landscaping.  Last Friday he poured a concrete driveway on their new place.  I felt it would be a good idea if someone (me, that is) would show up to inspect and make sure everything would be done to spec.  It was!!!
My brother is a construction engineer.  I never doubt his abilities to do anything very well.  Although retired - or kinda retired - he is always busy dabbling in some type of home improvement.
Working the cement with a float - followed by some brooming and a coating of chemical product that prevents the cement from drying too quickly. 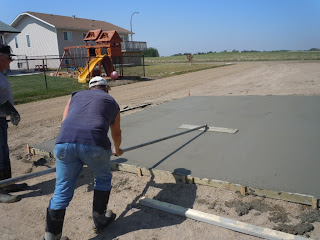 I was so taken by this product that I took a quick lesson from my brother on the set up and install.  I think a small piece of our back yard will have some of this turf in the near future.
The following evening - Saturday -  we all got together for a nice dinner.  It gave us the opportunity to catch up on our respective lives.

So much more to 'show and tell' and those stories will be featured in the coming days.  Now that we are back in Edmonton, Alberta - visiting with our two children - and have access to WiFi, we'll be able to catch up  on blogs we have not been able to read and to contribute our musings for the interested and the curious.
Thanks for dropping by.
Posted by René and Jeanette Genereux at 6:54 PM