A SHOWER:
Another busy week and weekend.

Daughter Ginette flew in from Edmonton to assist with organizing one of her best friend's shower party. The party was hosted at our home this past Sunday.  Nicole's mom (Aline) and soon to be mother in law (Kathy), Jana (future sister in law to Nicole) and Ginette - along with several more busy bees - readied our house, decorated, furniture was rearranged for a large gathering and food was prepared for the main event.
Twenty three women participated in 'showering' Nicole in advance of her wedding to Trevor, this coming November 4, 2011.

While the food preparation and decorating was happening, I was with my group of friends at a White Rock Tim Horton's - solving the world's problems.  When I returned home, the place was buzzing with laughter. 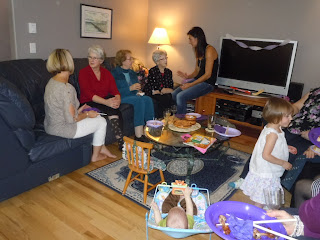 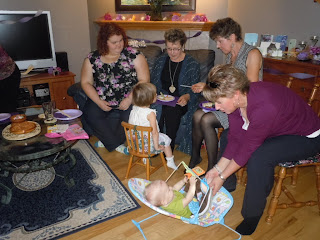 I meant to snap a photo of the 13 or so cars that dotted our driveway and the street.  I had advised our neighbours of the event.  Good thing!  They may have wondered what was going on!
A LICENSE:
Although we have lived on the Canadian west coast these past 30 years, our dually and 5th wheel were registered in the province of Alberta, these past two years.  Why?  Well, when I sold my multimedia production company on the west coast a few years back, I was also involved in business in the Edmonton area.  Although we kept our home here on the coast, I was busy with driving and flying back and forth to Alberta.  At one point, I took an Alberta driver's license because I was spending more time there than here on the coast.  I knew it would be for a couple of years.  During that time, we purchased our truck and 5th wheel in the USA and I registered both in Alberta.  Why not?  I had an Alberta driver's license! That is the short of it.

We still have business investments in Alberta but when we sold our White Rock, BC, home and moved to our new home in Langley (20 minutes further east) this past March, 2011, I thought it best to renew my BC license.  That was when I discovered that although I was legal to drive my truck and 5th wheel in Alberta, I would have to study, write a written test and take a 90 minute driving test in BC to legally drive and pull a 5th wheel.  What?  Although I have pulled my 5th wheel for over two years (well over 25,000km) I now need to be tested and re-licensed in the province of British Columbia?  What's with that?
In British Columbia, it is mandatory to obtain what was previously known as a Code 51 endorsement (now known as a Code 7 endorsement) to pull a 5th wheel over a certain weight.  Well, any 5th wheel over about 20 feet seems to require the endorsement.   OK, I thought, bite the bullet, obtain the study guide in preparation for the written test, take the driving test and get on with it. Hey, we want to head south this winter!

I studied the 65 page book, wrote the test (must get 80% to pass), got 93%, was awarded a learner's license and could only pull my fiver with an experienced and licensed BC registered driver.  Go figure!  (I hate bureaucracy....)
When I was studying for the written exam, I also read, in great detail, about the 90 minute, 360 degree walk about and driving test.  It reminded me of how our son does a complete walk about before he starts and airplane and flies off. One is given 30 minutes to detail everything about one's truck (fluids, lights, all accessories, springs, shocks, etc., etc., etc.) and the fiver too. One must tell the driver examiner virtually everything...and point it out too.  It is very involving.
Talking to a motorcycle friend, who recently purchased a 5th wheel, he explained how he had retained the services of a driving instructor to pre-qualify him and prepare him for the driving test.  I took his advice and hired a well experienced driving trainer.  The owner of Euro Driving School walked me through the comprehensive 360 degree walk around and made me do it.  Good advice.  You are only allowed 10 demerits (mistakes) and that is easy to do unless you rehearse and rehearse.  I made it through with one demerit.  I failed to verbally identify that my dash lights were working. Imagine that?

My instructor was so good at pointing my own deficiencies (because we are creatures of habit) such as where to place my hands on the steering wheel, avoiding my fiver wheels ever touching a yellow or white line, and so on.  He awakened in me the need to be most diligent  while driving with an examiner from the testing facility.  I really appreciated my instructor's advice.

Yesterday morning - bright and early - I woke up at 5:00 am, re-read my study materials, committed myself to following the necessary norms expected by the driver examiner, waited for my instructor to show up (because I could not legally drive my rig without a registered license holder in the cab) so we could drive to the testing station for an 8:15 am appointment.

We arrived at the testing facility in plenty of time.  I paid the dues and proceeded to begin the 360 walk about with my driving examiner.  She was business like, but friendly too.  All that studying and repetitive rehearsals paid off.  Although it took me 35 minutes to complete the walkabout (only 30 minutes allowed) she felt I was so thorough that she didn't want to penalize me.  Phew!  One demerit only for failure to point out and verbally state that I did have dash lights that do work!

The driving test proved positive too.  Only 50 demerit points are allowed.  I knew the examiners were very strict.  And she was.  She would look at my RPM gauge at every stop sign to prove that I was at a dead stop.  I could not ever touch a white or yellow line with my fiver wheels (in turns, on the highway, in urban and rural areas, etc). Although Attila had repeatedly told me not to turn my front wheels to the left while waiting to make a left turn in an intersection (one of my habits), the old creature driving habit returned and I managed to do that three (3) times during the test.  YIKES!  That's 5 points for each infraction for a total of 15 demerits!

The only other infraction was 5 points off for hesitating during a left hand turn at a busy intersection.  I waited during a yellow light for what I believed was a speeding - on coming -  car that I felt may not stop before the light turns red. Yikes!

My examiner suggested we head back to the testing facility...a full 20 minutes before my driving exam was to end!  What's with that?  I wondered!  She told me that I had passed! She stated that I was a solid driver, experienced, cautious, able to keep speed, had good perception, always in control, and that I was comfortable with my 22 foot truck length and 40 foot 5th wheel length, in busy traffic and on the highways and byways. She did put me through the paces and felt I was quite relaxed.  She liked that.  So, I completed the driving sequence of the test with only 20 demerits (max 50 to fail)...and with 15 of those demerits due to having my front wheels turned to the left while preparing to turn left in an intersection.

That story told, I am now legally license in British Columbia.  Before this, I was formerly legal in Alberta and every other Canadian Province and US State. I have it on good authority that BC is the only Province that now require a special endorsement to pull a 5th wheel recreational trailer over a certain weight and length. I never did check this out to see if it is true or not.  It is of little consequence or importance to me now that I have gone through the process.  I am legally licensed on BC now.

Now get this!  You do not need a special endorsement to drive a Class 'A' motorhome in British Columbia.  What is with that?  I shake my head at government and its rules (more encumbrances), but BC ranks as one province that loves sticking spokes in the wheels of its citizenry. That is what is so to like about Alberta.  The government there is less intrusive.  It is clearly a 'want to do' Province and hence the reason we do business there.
Thanks for dropping by.
Posted by René and Jeanette Genereux at 7:13 AM