Although I have to drive a bit of distance to write a blog, I have not had the time - nor the access - to read or even catch up with the blogs I regularly read and/or comment on.  That's just the way it's been....and will continue to be so till Jeanette and I get into the city of Edmonton, Alberta, in the coming days.

It is Father's Day evening and I am sitting in our truck, outside the library in the town of Two Hills, Alberta.  It isn't open but when last here to write the previous blog, I had entered the necessary data, including password, that allows me to access the WiFi from the street, anytime.
Metro is a prankster, joke teller and generally likes to laugh....as often as possible.  He asked where we wintered during the winter months. We mentioned the areas we've been to and when Yuma, AZ, was mentioned, he said that he and wife Diane had been there three years in a row for winter.  He also 'jokingly said' that he never found winter there so they have not been back since!!!!    LOL 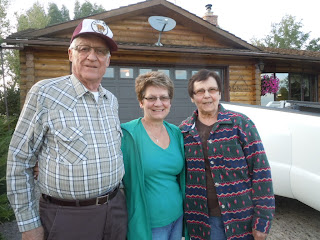 We had a wonderful visit with them before returning Jeanette's mom back to the long term care facility she now resides in.
Fourty five minutes from Jeanette's parents' farm is the town of St. Paul.  One brother and one sister live there.  My sister and brother organized a Friday evening party at my niece's place, out in the country, south of town.  It was a beautiful evening and we took advantage to BBQ outdoors, take in the rolling clouds, horses and the peace and tranquility of the area.
My brother and brother in law got into the joke telling early.  We laughed a lot....had a great time visiting and just enjoyed the awesome evening outdoors.  Hard to beat that! 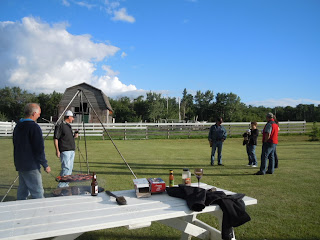 Thanks for throwing a really nice surprise birthday party.  Special thanks to my sister Paulette, who organized it, Bernie and Rita for the salad, Jeff and Tina (with daughter Shania and son Brenden) for hosting.....!
Easton was a good distraction for Mary, following the passing of her husband John.  She's coping well, all things considered. Jeanette has driven her out to the farm almost every day so that she could watch and guide some of the work that we undertook; including mowing the grass, cleaning some of the farm equipment and watching our son Deni hook up an old set of discs and rejuvenate the soil in the large gardens.  The weeds had taken over.  It all looks very nice now. 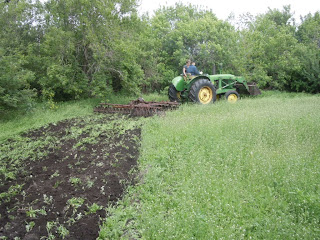 While I am writing this blog, Jeanette is visiting with her mother at the long term care facility.  We chose to drive into town and have dinner with her.  If one calls in advance, the kitchen staff will provide for visitors.  Nice touch....and I have to say that the food - typically prepared by the local staff - is exceptionally good.  It's not often one can make that declaration when speaking about institutional meals.

Posted by René and Jeanette Genereux at 6:28 PM