These past few days have seen us busy with riding, golfing, visiting and dining.  Phew!...so much going on and so much fun too.
Twenty or so miles from Yuma lies the city of San Luis, AZ and San Luis, Mexico.  It's a border city.  The Mexican city's population is in the 300,000 plus. 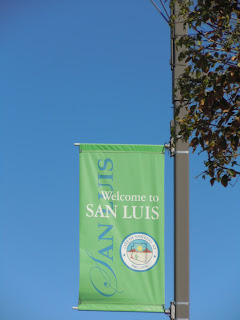 We did not attempt to cross into Mexico.  It was more a question of time over desire.  Most American and Canadian travelers park on the US side and walk through the border. 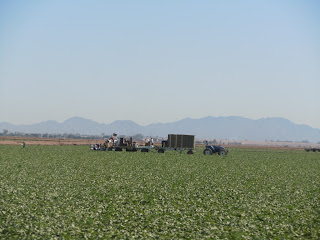 Most of the vegetable and fruit crops from this area find their way to the northern US states and Canadian provinces.  I've seen several Canadian trucks arrive and leave here.
This testy golf course offered beautiful greens and T-boxes but was seriously lacking H20 on  the fairways.  As a result, the golf balls took odd bounces and you never knew where your ball could end up. In our case, it seemed that the bounces favoured the rocky washes.  A bit of water would have gone a long way to controlling ball landing.
Local gossip speaks to family members, who own the course, and their in fighting, and the skimming of profits.   That, allegedly leaves the golf superintendent with little budget to water the fairways.  How sad!  It would be a first class golf course with a bit more watering and attention. It was a first class golf course while in control of the founders.

We've noticed that, other than a few decent golf courses in this area, most courses are sub par.  That is in sharp contrast to golf courses in the Phoenix, AZ and Palm Springs, CA regions.  If the Yuma area golfing operators  improved their golf courses, I would bet the golfing RVers would head to this region.
This 'Foothills Eatery and Spirits' sits just south off the I-8 off ramp.  Those in the know rave about the food and great prices here.  We took the advice to heart and joined friends and my brother and sister in law for an 'all you can eat' fish dinner on Friday evening.  Well, it was true to its billing.  The cod fish was endless....and really tasty....and the cost was $9.75 each - including soup, salad, desert and tea/coffee.  What's not to like.  We recommend this eatery.  It's a going concern!
The next blog will feature the ride we took yesterday, west, past the Yuma Proving Grounds,into the Imperial Valley. It's the site of the famous Imperial Dam that began diverting the Colorado River into canals that now water the crops of southern California and Arizona fields.

Thanks for dropping by.
Posted by René and Jeanette Genereux at 7:29 AM