A House Full of Fun.

The weekend came and went quickly.  It was fun!  We celebrated and then celebrated more.

The scoop:
Garry thought he was coming over to celebrate my birthday but we had a better plan.  His daughter Nicole, in cahoots with her mom Aline, ourselves, and many special friends, chose last Friday night to throw a huge surprise birthday for him.  Was he surprised?
Garry had been told that our kids, his kids, and us four older adults, would be enjoying a nice two family Friday evening barbecue dinner at our home.  Garry and Aline were spending the weekend with us. The primary purpose for their visit was to attend a close friend's retirement party on Saturday evening.
So...we had a nice dinner before the major eruption happened. 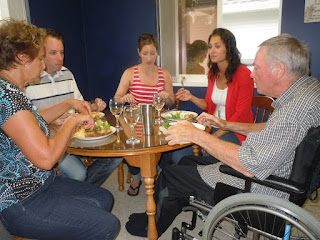 At 7:00 sharp - while Garry was sitting in our kitchen and unable to see our driveway out front - about 30 close friends were strutting party hats and stormed our home singing 'Happy Birthday'.
Garry was beside himself!  Not only had his son (who is working a summer contract at the northern tip of Vancouver Island) Jesse surprised him at dinner, here were another 30 guests who came to celebrate his birthday. 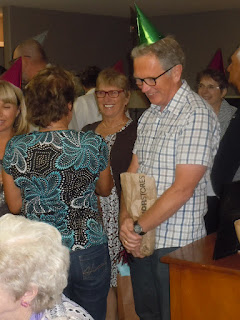 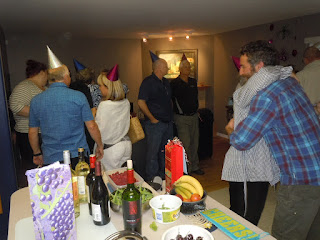 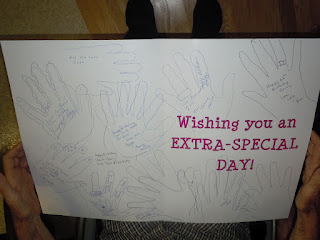 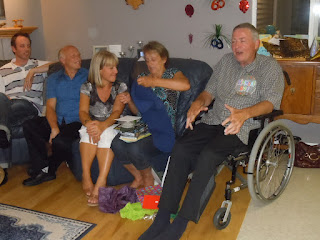 A photo taken once most of the guest had left.
Garry and Aline did attend a Saturday evening retirement function for one of their good friends.  Sunday morning was reserved for some visiting.  Nicole dropped by for breakfast too before Garry and Aline prepared to leave for one more short visit with friends prior to driving back home to the Okanagan.

At that time, Jeanette was preparing to leave for a Sunday afternoon shower party to honour our future daughter in law, Courtney.

It was a good gathering. 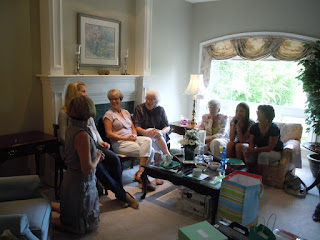 Now you know just how busy our weekend was.  And it was fun too!
Shortly after Jeanette' s return home following the shower party, we chose to head out for a late afternoon motorcycle ride.  Here are a few photos from the ride.
That was our weekend.  Thanks for dropping by.
Posted by René and Jeanette Genereux at 4:32 PM