I'm off to Ucluelet, Vancouver Island, for a few days of off shore Pacific Ocean salmon fishing. The area I'm off too is remote (about 20 km) away from Ucluelet.  I'm told there is no cell phone service .  That also means there will be no opportunity to blog till I return.
I'll be motorcycling to the Island - taking the mid-island ferry from Tsawwassen terminal to Dukes Point south of Nanaimo.  I'll be joining my fishing partners there.  The motorcycle will stay behind while I jump in with friends for the drive to the west coast.
I'm joining Hector and Diane for some off shore fishing.  Their camp is all set up and I don't even need to take my fishing rod and tackle box.  That's why I can travel light on the motorcycle.
The weather man has forecast some rather fantastic weather.  What's not to like about that!
We'll be heading out to sea early in the mornings.  By 11:00 am we'll return before heading out again in late afternoon.  Hector claims the fish are biting well about 8 - 10 miles off shore.  I'm going to try to catch a halibut, if possible. 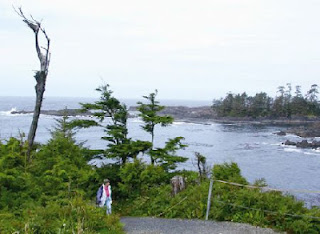 So, that about tells the story of where I will be for the next several days.  I'll catch up on blogs reading upon my return.

The environment of tranquil Ucluelet provides a stimulating and dramatic backdrop for working, living, and recreating. The town of Ucluelet offers beaches, multi-use sports fields, community parks, waterfront promenades, restaurants, unique shops and galleries, a mini aquarium and a range of accommodation choices. The motto of Ucluelet is “Living on the Edge” due in part to its location on a peninsula surrounded by water. This marine influence permeates Ucluelet from the climate, to events such as the Pacific Rim Whale Festival, to the design of buildings, which are uniquely West Coast. 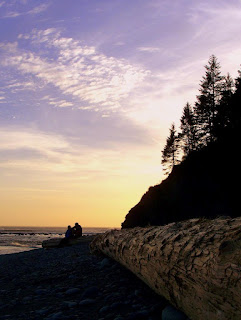 ABOUT UCLUELET
Ucluelet is located 288 kilometres (km) northwest of the British Columbia provincial capital, Victoria, on the magnificent outer West Coast of Vancouver Island. The closest city is Port Alberni approximately 110 km to the east. The District of Tofino is 40 km northwest of Ucluelet. In between Tofino and Ucluelet is the Long Beach Unit of Pacific Rim National Park Reserve.  Ucluelet provides easy water access to Barkley Sound; a spectacular marine area that features the Broken Group Islands Unit of Pacific Rim National Reserve.
Although not my photographs, those in this blog are taken near or around Ucluelet, Vancouver Island.
That's the short story of the week.  Thanks for dropping by.  Fish tales to come in the next blog chapter.
Posted by René and Jeanette Genereux at 7:14 PM