To Mexico, A Visit With Ontario Bloggers, and More.....

What would a visit to Yuma, Arizona be without at least a short visit to Algodones, Mexico?  Well, although we did not have an agenda for our visit, it was an outing we looked forward to. It will be explained ahead.
A couple of hours the day before (Wednesday) were set aside to, once again, wash our 5th wheel and truck.  Although we had it nice and clean, while in the Palm Springs area, it got good and dirty when we traveled from Temecula to San Diego, several days back.
Checking with friends - and having read the rules at Fortuna de Oro - it was clear that one could wash their toys as long as one was on the rented lot.  OK!  So, the fiver and truck are nice and clean, once again.
Starting out shortly after sun up on Wednesday, the scrub brush was put to good use.  Before long, the hoses and brush were put away.  Yuma water is notorious for leaving white spots but with a white truck - and half the 5th wheel being white too - white spots are not an insurmountable problem.  The windows and chrome do require some detailing though.  A few minutes with 'Invisible Glass' and the white spots were history.
We cannot confirm if there is a contest for the best Christmas decorated site but this corner in Fortuna de Oro certainly tops the charts.  These owners have gone all out and it is a very pretty place to walk around, once the sun sets.  In fact, it seems the long timers in this park really get behind the Christmas spirit.  Nice to see!

We don't have the photos to prove it but we shared a Wednesday afternoon happy hour with our motorcycle friends (and Jeanette's school year colleagues) at a pool side karaoke.  One of our motorcyclist friends, Fred did get up to entertain the audience.  Nice!
Yuma is famous for having the most sun in the United States.  With water, it's amazing the crops that can be grown here.  Yuma grows, reaps and supplies a vast amount of winter vegetables to consumers in continental North America; and that includes growing cotton too!
This is a very good time to visit Los Algodones, Mexico.  Why?  Quite simply, there are far fewer tourists now than when January and February roll in.  It can be a zoo! And it most often leads to very long line ups to clear US customs before crossing back into the United States.

We parked at the Quechan Indian owned parking facility on the US side of the border, paid our $6, parked and walked right into Algodones. Quechan Tribal Council  A large casino also dots the area near the border crossing.
In the past, we featured several photos of the main draw for tourists here in Algodones; Dental and Optical clinics and pharmacies that also peddle cheap liquor.

Clicking on the WEB site will colour a very good picture for those who aren't familiar with what Los Algodones, Mexico has to offer tourists and visitors.     Visiting Los Algodones, B.C. - “Border Medical Land” 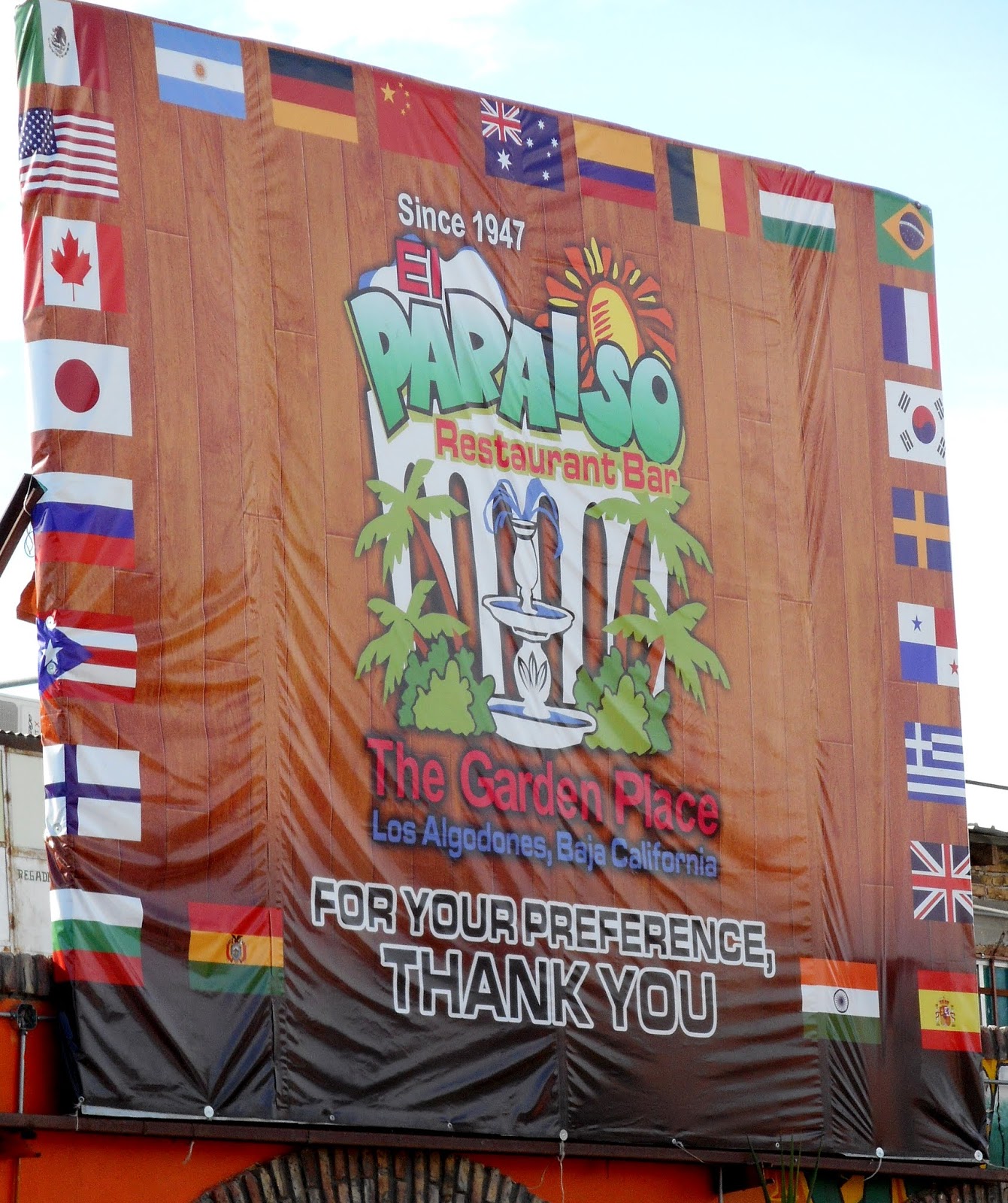 After walking around the small town centre, Jeanette and I chose the Paraiso Restaurant and Bar - a large sit down, open air facility for a lunch time break.  With local Mexican music from a live band, this place adds to the festive feel of Mexico.  The food is pretty good too.
While traipsing around the town, the peddlers are quick to lead you to cheap dental or optical services while others try to lure you into cheap pharmacies, liquor stores or t-shirt, leather goods and Mexican jewellery stores.  It's what they do!  It's what makes Los Algodones the draw for American and Canadian tourists.
I settled for a burrito and Jeanette chose a quesadilla.  Listening to Christmas carols - sung by a Mexican band - added to the flavour of this town.

I will just add that I had a very good experience with a dental issue that was corrected here, three years ago.  My research led me to a highly qualified dental surgeon that resulted in a successful root canal and crown.

Our Canadian dentist, who had earlier performed the root canal, failed the procedure and that led to complications with an infection and the need for a complete re-do dental surgery.  Our dental plan (as with most dental plans) will only cover one root canal procedure on a tooth - even if the original procedure had failed.  If further intervention is required - such as a second surgery for me - it is incredibly costly to to pay for out of pocket.  The second surgery in Canada would have cost me between $3,000 and $4,000 - including a new crown. The very same procedure was performed in Los Algodones for $390 Canadian dollars.

I do not advocate for the Los Algodones dental services; I merely relate my own personal and most positive experience.  It is important for anyone to do a thorough research before making their own personal decisions.

With no line ups when we chose to leave Los Algodones for the US Customs, we were quickly back at the motorcycle and heading to a pre-arranged meet and greet with George and Suzie,  Our Awesome Travels  bloggers who call Ontario home when they aren't traveling the highways and byways of the US of A.
From the Mexico/US border, Pilot Knob RV Park was a short ride, west bound, down I-8.
George was at the ready with his camera and he captured the photo below as we arrived....
We exchanged greetings and quickly relaxed outdoors, enjoying some fresh Colombian roasted coffee. It took little time to get caught up with each others' lives because we read each others' RV blogs.  It was fun to chat about a whole gamut of topics though.  And we did that.....for a few hours.  Suzie and George are true 'full time' RV veterans.  They have traveled a lot.  As some might say, they have been there, seen it, lived it and survived to write their stories.  They are a fun couple to engage in chatter and to talk about anything.
We could have spent more time gabbing with Suzie and George but we had another planned commitment that had us head back to the Yuma Foothills RV park we are in.  We needed to clean up, load up some food stuff and drive to my brother and sister in law's Country Roads RV Resort for happy hour and dinner.
Jeanette had insisted on providing dinner as long as she could use Bernie and Rita's stove.  The surprise?  A tourtiere! Click on the following link for more information on this French Canadian Christmas tradition. The recipe is included as well.  Tourtiere French Canadian Meat Pie) Recipe - Food.com

Our family is French Canadian.  Bernie (Bernard is his full name) and I speak French. Our siblings (all six of us) grew up with the language and culture and traditions. We grew up speaking the language at home, in St. Paul, Alberta.  The French traditions - and the language - carry on today.  Rita, Bernie's wife is also French Canadian.  She too bakes 'tourtiere'.  That said though, Jeanette, equally talented at baking 'tourtiere', brought this meal over to their place.  In advance of Christmas, she made several 'tourtieres' and brought a few frozen pies along when we left on our RV'ing journey.

Also to note is the fact that Jeanette is not of French Canadian descent.  She is bilingual however, having grown up in a very traditional Ukrainian household on their family farm in central/east Alberta.  But she does make a fantastic 'tourtiere'.  And she also regularly prepares fantastic traditional Ukrainian meals.
It was a lovely evening enjoyed with our Yuma family.  And we plan to meet up again, this evening (Friday) in fact,  for a dinner out at at Chez Lin's; a reputable and highly popular Chinese buffet, here in Yuma.

Saturday is departure day for us.   We begin our journey towards Las Vegas and our pre-planned flights back home for the Christmas holidays.  More on that in the days ahead.

Yuma offered up some most interesting connections with  new found motorcycle friends, family get togethers, great countryside motorcycle rides, meeting RV bloggers and absolutely enjoying the fantastic summer like weather this area is well known for.  It has been fun!

Thanks for dropping in.
Posted by René and Jeanette Genereux at 3:36 AM