Well, while riding through the south side of the Yuma Proving Grounds, heading west towards the Imperial Dam water diversion project, we continued further west till we came upon this smaller dam.  The Laguna Dam is also part of the Imperial Dam Water Diversion project.  Water is diverted from the Colorado River to quench the thirsty vegetable and fruit lands in the southwest Arizona and southern California regions.
It was quite the engineering feat when, in the 1930's, the dam was built to divert water from the Colorado River.  It resulted in four major canals that divert water every which way it is needed.  Another result is the formation of lakes that dot this area.
The were a few fishers casting for small mouth bass and catfish that, we are told, can be found in these waters.  It's almost incomprehensible to find lakes in this dry, arid, desert country.  But exist they do!
The lake above is called Squaw Lake Recreation Site.  It is located at the very end of the road that leads north from the Imperial Dam.  With limited RV services (sever, water, electricity), it still proves popular with RVers. 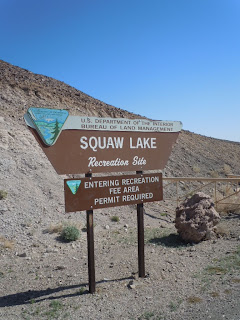 Of interest is the cost per day for RVing on these BLM lands.  $15/ day is required.  That seemed high for limited services when we are paying $13/ day with full services in the Yuma Foothills.  We have all available services imaginable  within a short driving distance.   But to each his/her own.  Many RVers like the boonies while others prefer full services.
A monthly site here, with a lake view lot, costs between $400 and $580/month + electricity. Weekly rates are between $300 and $460, and daily rates run from $56 to $77.  The monthly rate is clearly the favourable route to go here.
While motorcycling back from the Imperial Dam, we circle around the southern and northern entrances to the Yuma Proving Grounds on our way to Martinez Lake.  It's on the north east side of the Imperial Dam.
We featured this area in one of our blogs last year at about this time.  Suffice it to say that it too is a popular draw for RVers who enjoy fishing and boating.
Hector and Diane invited us to join them, along with Lucky and Trena (RVers from the Abbotsford/Chilliwack area of BC) for an outdoor dinner.  What a feast they put on.  Lucky and Trena had just rolled in with the Class 'A', from Catalina RV Park in Desert Hot Springs, CA, where they spend most of their snowbirding time.
The casita, in the lot that Hector, Diane, Lucky and Trena occupy, has an outdoor kitchen.  What a treat that is.

We enjoyed catching up on each others travels and experiences.  A lovely evening it was.

Posted by René and Jeanette Genereux at 10:45 AM