Well, as expected, we moved our fiver from Pod 22 B, on the Colorado River, to Pod 16 A.  The previous spot was nice but this one is even nicer.  Check out the view from our picture window.  How nice is that!
It was a worthwhile move last Saturday morning before the big winds blew in.  From tear down, hookup, short drive to Pod 16 and set up, only took Jeanette and I two hours.  We've got a really good system going and it's working well.

Hector and I - along with two other RVers - headed for the links for a fantastic day of golf.  The weather could not have been any better.
AC - from Alabama - is one of those characters we all enjoy meeting in life.  He's been a fulltimer for 20 + years.  And what a character!  I enjoyed my chats, loaded with laughter, with him.  He has seen and done a lot of interesting things in life.  My favourite line (from his mouth) goes something like this, "If I have to explain it to you, it could take two hours.  If you watch me, it'l only take fiver minutes."  You have to imagine that great Alabama accent while reading this. He is comical, interesting, and sees life with a glass half full over a glass half empty.  Wonderful guy!
The weather has been beautiful.  Of course, there are the odd days when the wind blows but overall, it's been a treat to be here these past few weeks.
The photo above was taken in mid-afternoon while we were driving to Laughlin to attend a fantastic live performance given by the legendary Frankie Valli. The dirt and sand was blowing across the highway due to the recent field work done by the local farmers.
When we arrived in the Mojave desert a few weeks back, I noticed a large billboard advertising the legendary Frankie Valli's  one night only performance at the Edgewater Casino on Saturday, January 21, 2012.  The day after our arrival in our RV spot, we drove out to Laughlin and bought four tickets to the show.  They were selling so fast that had we waited any longer we would have lost out. 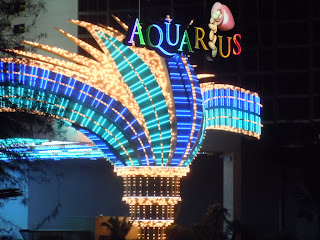 Most - if not all - blog readers will know who Frankie Valli is.  He and his fantastic 'Four Seasons' have been writing, recording and performing great music for the past 50 years.  Do you remember these number 1 hits?  "Big Girls Don' Cry" and 'Walk Like a Man"?  How about "Let's Hang on", "Working My Way Back to You", "Opus 17 (Don't You Worry About Me)", and his most famous "Can't Take My Eyes Off of You"!  It's interesting to note that "Can't Take My Eyes Off You", released in 1967 went No. 2 on Billboard and No. 1 in Cashbox.  It has also become one of the Top Ten Most-Played songs in the history of BMI.  Stunning!!!!
He recorded "My Eyes Adored You" to world acclaim in 1975 which also reached No. 1 on the charts.  Amazing career...and a humble performer who thanked the live audience for his life because people bought his music.

Suffice it to say that it was a highlight to have witnesses his live performance.  He sure got the audience on its feet.....and that was a difficult thing to do for many in the audience.
Over time, the sun popped out and we shed the layers of clothing back to the norm of shorts and short sleeve shirts.
We were sitting inside the RV catching up on the PGA golf tournament from La Quinta, CA on the TV when Hector and Diane came walking over from Pod 22.  We sat out and enjoyed the balance of the afternoon in the warm sun.  As soon as the sun hides away in the west, the cool air follows quickly. 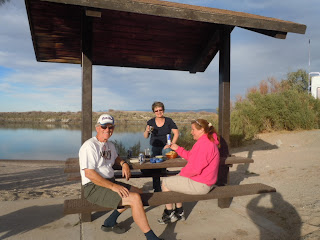 That sums up the rvvoyageurs these past few days.  Thanks for dropping in.
Posted by René and Jeanette Genereux at 11:10 AM