Two days into the drive south!

We left our home at 7:45 am for the Aldergrove border entry into the US of A.  We waited a few minutes for the border to open and, when it did, we were the first in line at the commercial truck entry.  You guessed it, we were sent to a parking area for an inspection.  That was our first time with the RV. The US border agent in charge of agricultural products was a really nice fella and he made quick work of checking out our rig.  We were held up for about 30 minutes.
Having driven away from US customs we made our way through Bellingham, WA. then south on I-5.  We left on Saturday, Dec. 31 - New Years Eve.

The afternoon before departure I had moved the 5th wheel on the street to load and secure our motorcycle.  I disconnected from house power and set the fridge to run on 12 Volt.  A few hours later while  inside the 5th wheel, I checked out our power systems and was alarmed that the 12 Volt power was dead.  Hmmm!  Bad battery?  Failed converter?  A fuse?  It was getting late so I ran an extension cord to an external battery charger to charge the batteries.  That kept the fridge working. I really thought the converter had failed.
Before leaving home, I rolled up the extension cord, disconnected the battery charger, stepped back into the fiver....and our management system barely registered 1/3rd energy reserve in the batteries.  What's with that!  Something more serious is at play.  I started our truck in the belief that it would keep the 12 Volt system up and running.  I walked back to the fiver and low and behold, the battery management system indicated the batteries  were dead.  Sheesh!!
You can see the motorcycle on the swivel wheel on the inboard TV.  It gives me great comfort to see what is happening back there while on the road.  It also helps to see who or what is behind the rig when I back up.
We had no choice but to solve the 12 Volt problem so while en route, I mentioned to Jeanette that we had an electrical problem and that we would likely have to alter our schedule to get the needed repairs done.  One hour from the US/Canada border,  on the I-5, is a small city by the name of Burlington.  We had been to a Camping World there in the past and I was hoping it would be open for business and that they could fit us in. We caught a break!  Yeah!
We were really fortunate to show up at a great time.  A really nice service manager got us in within minutes, a really experience electrical wizard was summoned to the service counter to hear my story, and he quickly mentioned three likely scenarios.  Our truck, 5th and attached swivel wheel with motorcycle were quickly driven into the shop and the detective work began.  When talking with the electrical wizard, I mentioned that once he found the problem, I would appreciate if I could see the problem and understand the fix.  The mechanic was fantastic.  He did just that once the problems were diagnosed. What a great guy!
Within 30 minutes the electrical wizard appeared in the customer service area and summoned me to the shop.  Wow!  What a great shop!  He explained the two problems.  Problem #1.  He guessed that while at home, I had plugged the fiver into a GFI receptacle.  That was true but how did he know that, I wondered.  He also asked if I had tripped the GFI breaker.  I pleaded guilty to that too!  Holly smokes!  Was this electrical wizard a mind reader too?  He then explained that RV's that regularly operate on 50 Volts do not like GFI breakers.  When plugged into a 15 volt receptacle it was fine till the breaker tripped. When the breaker was reset, it created a problem for the converter.  He suggested that when plugged in at home, I use a standard non GFI power receptacle. When he tested the converter and batteries, the converter was charging the batteries well.

Problem #2 was due to the fact that a 20 amp fuse in our truck had popped.  Once replaced, power from the truck was directed to the 12 Volt system in the 5th wheel.  OK!  He showed me everything they did and then, in his own words, stated he would make quick work to' button up the truck and fiver' and we would be good to go within 10 minutes.  They also topped up the propane in both tanks. 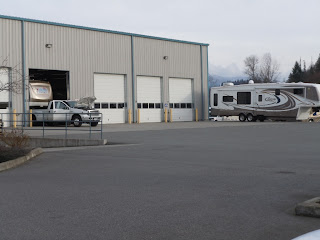 So, after 90 minutes of diagnosis and repair and then depositing a few $$$ with the service manager, we were handed back the keys and off we went.
With the US border inspection and the electrical repairs, we fell two hours behind our intended schedule.  So what!  It is what it is.  Heading south through I-5 proved seamless.  There was negligible traffic when we passed through Seattle, WA. That is the exception rather than the norm for that city.  It's usually chaotic!
We arrived at the RV park in Salem, Oregon, after 5:00 pm.  Once unhooked and set up, we headed off to do some grocery shopping and to acquire a new US TracFone. Once back from shopping we chose to celebrate the end of 2011 and the beginning of 2012 by going out for dinner in downtown Salem, the Oregon State Capital.  A nice Italian restaurant was found.  With a little Chianti, and awesome food, we toasted an end and a beginning.  Once back at the 5th wheel, we settled in for the evening but it proved impossible to stay awake till the midnight fireworks.  I was quickly lulled to sleep and remained undisturbed by the loud bangs and whistle sounds that fireworks provide.  Unusual but true. I was bagged! Jeanette gave me the play by play of the fireworks during our morning breakfast.

We had a great drive in the sun again today. We're  now at the 7 Feathers RV Resort and Casino - a 5 star resort (rated in the top 10 best RV resorts in Continental USA) - in Canyonville, Oregon.  We'll be here for two nights before driving the three high mountain passes into northern California.

Oh, by the way, our 12 Volt system is working well...and the truck maintains the voltage well while  under tow.  Yeah!


Our sincere best wishes for a healthy, successful and most fulfilling 2012 to our family, friends, fellow RV'ers, golfers, motorcyclists, and other readers in blog land.
Thanks for dropping by.
Posted by René and Jeanette Genereux at 9:46 PM