So Much To Look Forward To In Yuma...

The slug line (title above) lacks the punch I was trying hard to concoct but the ten days we have planned here will zoom by quickly.  We have a full agenda!

We shared in 'see you later' type hugs and we were rolling away from Canyon Vista RV Resort by 10:15 am.  It was a cool and blustery morning.
At I-10, we drove southbound for about three miles before turning towards Maricopa and points further south and west. 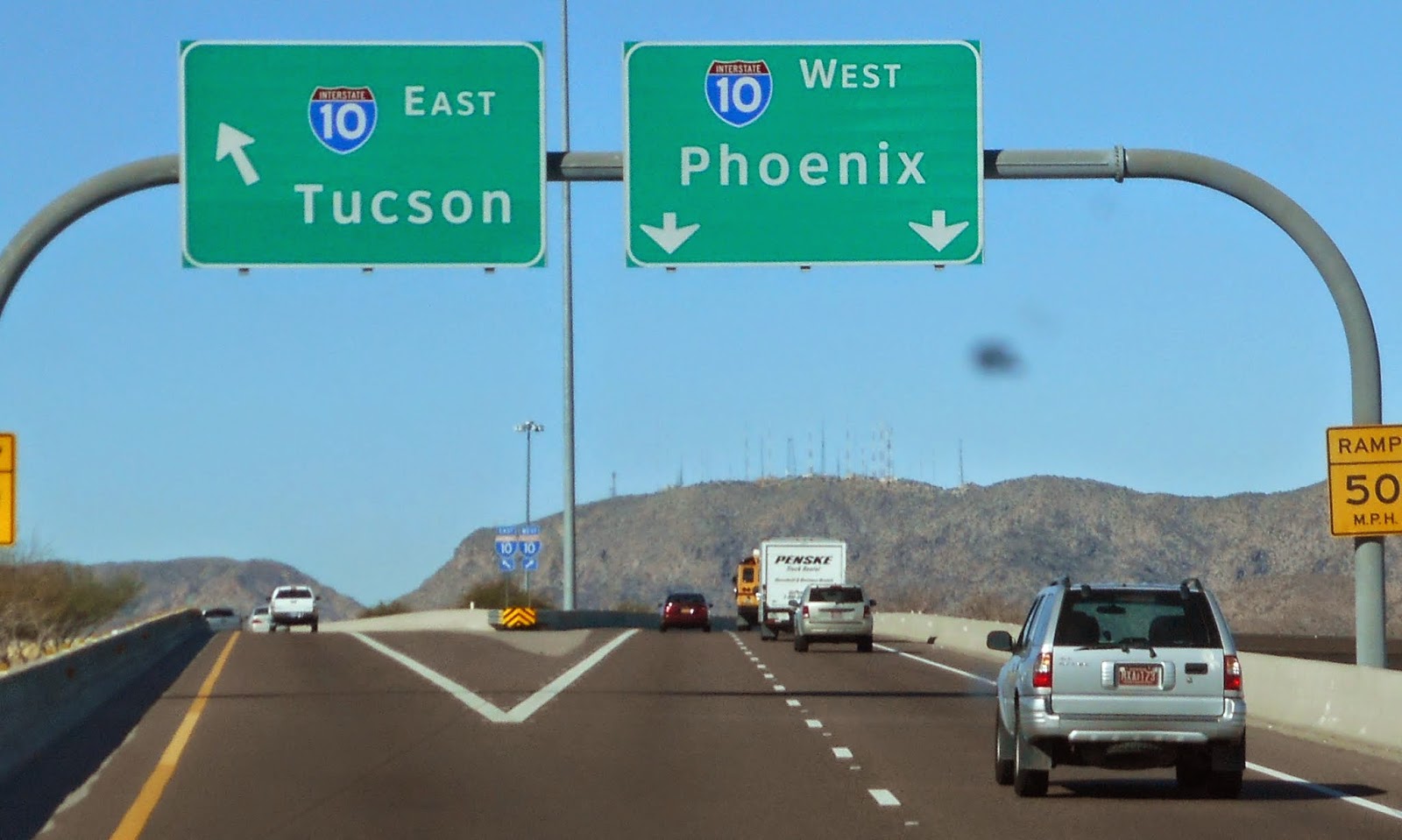 On the final overpass to connect to I-10, we could see a lot of sand blowing in the distance.  Hmmm, it was windy but we did not expect to see a sand storm.
Would we be driving through this storm?  Could we possibly head further south to avoid it?  Hmmm...!  The closer we were to Maricopa, the better we felt about driving due west on 238 to Gila Bend.  The long distance view appeared clear.
We weren't to escape the flying sand and dust though.  About 12 miles west of Maricopa, we drove head on into a dust up that lasted about three (3) seconds.  That's all!  So we can now attest to having driven through a short dust up.  And that was all we faced during the 3.5 hour drive to Yuma.

The closer we got to Yuma, the less saguaros we could see.  Clearly, the beauty we enjoyed around the greater Phoenix metro area included millions upon millions of saguaros.
Backed in, leveled, connected to services and having completed greetings with our new neighbours, we took the motorcycle off the swivel wheel and got to work removing the existing tire and rim to be replaced with a new tire and rim.  The previous tire/rim is now a spare.  It was time to change it out.

The temperature in Yuma was about 5 degrees warmer than the high in Gold Canyon.  Perhaps the Yuma locals are right when they state that this area is the warmest and sunniest spot in the southwest US.  I have seen documentation that professes that too.
We placed a few quick telephone calls to friends and my brother/sister in law.  We also got to speak with other Iowan friends, Bonnie and Fritz; whom we had met a few years back but had not been able to connect with last year.  We knew they would be in Yuma and, as it turned out, they rolled in to the Yuma Foothills area the same afternoon as us.
We already lined up a few motorcycle rides - and other outings - with the motorcycle riding group we first met this past December.  Fritz and Bonnie will be riding with us.  We will also be getting together today (Saturday) to attend the car show at Fortuna de Oro (Cal-Am RV Resort in Yuma). The resident motorcyclists - other than Bonnie/Fritz and Jeanette/me - own park models and spend their winter months in the park.
We dropped in on one of the couples we met and rode with last December.  Donna and Fred were home and we were quickly invited in to enjoy some laughter and banter over some fresh coffees. Good fun!

While visiting, Donna was often distracted by a ringing telephone.  We learned that it was her birthday and many friends were calling to wish her the special greetings.  Happy birthday, Donna!

Noticing some slight - but unusual tire wear - on the passenger front side of our F-350, we booked an early Monday morning appointment to have the front wheels realigned.  The service centre manager felt they had the tooling to manage the work. He asked if our truck was a four door and if our box was 6 or 8 ft. long.  We drive a four door with an 8 foot long box.  He then mentioned that since they had installed a new lift in the alignment bay, they had not worked on a 22 ft. long truck.  So...we'll see if that lift can handle our truck.
We also drove around the Yuma Foothills before returning to our RV site for some lunch and taking care of a bit of business.
Early afternoon had us head to Bernie and Rita's site in the lovely Country Roads RV Resort.  They own their lot and have a beautiful park model on it.  And the entire lot is free of sand and dirt.  Bernie and Rita have finished it with beautiful blocks, bricks and tiles.
We caught up on each others' news and views and before we knew it, dinner was served outdoors in their wind and sun protected deck.  We joined them on a long walk around the RV park before we suited up to ride back to our site.

So....it was a full day Friday for us....and we do look forward to the activities and rides to come in the days ahead.

Thanks for dropping in.
Posted by René and Jeanette Genereux at 8:26 AM